These are my claws - please leave them alone.

It seem that a nationwide USA declaw ban is more possible now, during the Obama administration than for many years because the democrats have the power and Obama appointed a so called "animal rights" person,  Cass R. Sunstein (see photo below), to a senior post in the administration, as Administrator of the White House Office of Information and Regulatory Affairs (OIRA).

As I understand it one of the roles of OIRA is to make regulations (administrative law)  that ensures that the laws enacted by the US Congress are accurately complied with. This is carried out by defining the powers and responsibilities of the agencies (administrative governmental bodies) that oversee and monitor 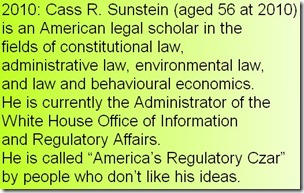 activities that put the law into effect.

In other words laws passed by the government of the USA need to be refined and managed by administrative bodies.

OK that's the boring bit out of the way. The important question for people who want to see declawing of cats banned nationwide in the USA, is whether Professor Sunstein's position can help facilitate a ban.

As a person who overseas the administration of the law and not the creation of the law he is restricted. However, the line between the two is not sharp. The following are factors that might bring about the possibility of a declaw ban.

Sunstein holds strong views about animal rights. Republicans (people on the right in terms of political thinking) dislike animal rights because they say they take away from their rights. Sunstein is against hunting. He is quoted as saying:

"We ought to ban hunting, I suggest, if there isn?t a purpose other than sport and fun. That should be against the law. It's time now." 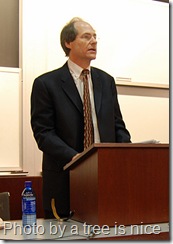 In the USA, there are many existing statutes that protect animals under a wide range of circumstances. Some of these statutes create crimes. Here is the law relating to California on animal cruelty, for example:

California - as at Oct 2008 -- The legislation covering cat cruelty laws USA for California is penal code 597(a). A person can be fined a maximum of $20,000 and/or imprisoned for a maximum of one year if he/she intentionally tortures, maims, mutilates, wounds or kills a living animal. {note: the HSUS site lists the penalty as 1-3 years - this probably relates to specific crimes that extend the one year penalty}

It is not unreasonable to ask why this law is not used against veterinarians and their clients who collude to declaw cats. The reason is probably because the cat's owner (the vet's "client"? this is not the client actually) consents to the declaw, the cat having no say in the matter. Prof. Sunstein believes that animals should have rights to the point where they can enforce them through a guardian:

"Animals should be permitted to bring suit, with human beings as their representatives, to prevent violations of current law ? Any animals that are entitled to bring suit would be represented by (human) counsel, who would owe guardian like obligations and make decisions, subject to those obligations, on their clients' behalf." -- Animal Rights: Current Debates and New Directions

Can he get that kind of attitude into law? Very unlikely at present. The world is not ready.

However, there will be laws that govern domestic animal welfare such as the The Animal Welfare Act 1966 (this governs laboratory experimentation, exhibition, transport, and dealers). It may be possible to use these sorts of laws through additional regulations to impose rules over declawing.

The point I am making is this. It may be possible to use existing law to ban declawing of cats with a change to the regulations - I am not sure. And if not a ban, restrictions may be possible. What if  operations of this type (
for the client's convenience) were regulated so that they could only happen under certain strictly controlled circumstances, for instance?

In addition Professor Sunstein obviously thinks in a similar way to the president. That means there is a greater likelihood of fresh law being created or fresh executive (originating in government) regulations being made that refine existing law and which then bans declawing of cats.

It is a long shot. But I am sure the AVMA are watching the situation carefully. California has led the way with declaw bans in certain cities but these city bans can no longer be created as the state prohibits it. There is little on the horizon in respect of declaw bans in other states or cities in other states (California is considered a bit different to other states an American visitor said). So a nationwide ban is all the more important and timely.

Is a nationwide declaw ban possible during the lifetime of the Obama administration? Yes, just, but unlikely due to veterinarian's lobbying and the public's apathy. Were there is a vested financial interest in a large body of people it is very difficult to create and enforce laws that work against them.

Is a nationwide USA declaw ban possible? to Declawing Cats