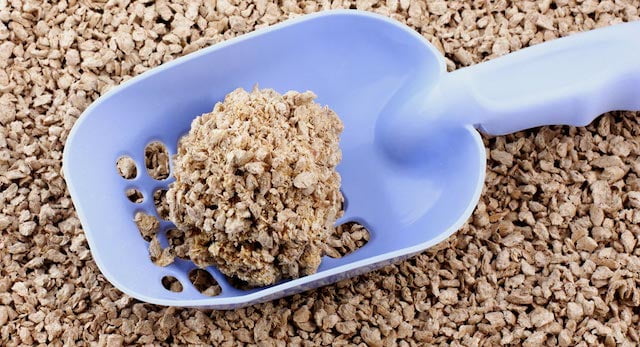 Is clumping cat litter safe? There are at least two examples on this website which demonstrate that clumping litter is not always safe. These two examples alone are a warning sign of sufficient gravity, I would have thought, to exclude this type of cat litter for use by kittens. For my part, I would never use it based upon what I have read here.

One example comes from a recent comment written by Dana who is a breeder of dwarf cats, specifically the Munchkin and the Napoleon. About clumping litter she said:

Yes it is very true that clay clumping cat litter can be deadly to your cats – especially young kittens! I am a breeder of the Munchkin/Napoleon breed and learned this lesson the hard way. One of our babies from our first litter of kittens suddenly became very ill around 5 wks old. The vet didn’t know what the cause was and advised me to “force feed” him via a syringe. He died on my chest during a feeding. Turns out he was ingesting the cat litter and it solidified in his stomach – like a concrete block! Even the dust from this clay can cause masses in the respiratory system as well! It’s horribly unhealthy for any animal!

So if Dana asked the question: ‘Is clumping cat litter safe?‘, she’d have to say no.

And several years ago, Claudette, living in Canada, wrote about her experience of losing a British Shorthair cat with whom she had lived for four years.

“I had the pleasure of owning a British Shorthair Cat for 4 years. He was a real gentleman and very smart as well.

I have lost my cat to cancer, after switching my cat litter to clumping litter. My cat died 3 month after I switched to this new cat litter bought at Costco.

Please don’t buy any clumping cat litter, it can be a hazard to your cat.

The good news is I will be getting a new cat around August and I will be using wood pellet, recommended by my breeder.

Once again if Claudette asked: ‘Is clumping cat litter safe?’, she’d have to say no as well. Very definitely a no.

Here, then, are two good examples which tell us that clumping cat litter is not always safe.

Young kittens can be curious about clumping litter and try to taste it. Particles of the litter can get stuck in their paws which is subsequently licked off and ingested. There can be a build up over time inside a kitten which can be fatal as a hard clump is formed inside the digestive tract.

The ASPCA suggested that caretakers might like to wait until kittens are 3 to 4 months of age before introducing them to clumping cat litter.

Another form of cat litter is also potentially dangerous (or definitely dangerous) namely the very lightweight version of litter which causes dust to fly around. I have several pages on Tidy Cats Lightweight Litter. The general gist of the articles is that the litter is dangerous because it contains an abrasive substance called perlite aka volcanic glass. There’s a story on this site stating that this litter allegedly killed four Tonkinese kittens.

Dana, as you can see, converted to a wood-based litter because it’s safer. When I was using cat litter, I always used wood-based litter. At present my cat goes to the toilet outside in the garden where I have a special area for him.

I would welcome the input of others on this difficult subject. Many years ago I did a breakdown on the environmental impact of using clay or wood-based litters, which may interest someone.

There are many other pages on this site about cat litter. Please use the search tool to find what you are looking for.