↓
Home→Cat Breeds→Savannah Cat→Is it possible to breed extremely large domestic cats that could defend their owner’s house like a big dog?

I guess that some people fancy the idea of having a guard cat and believe that in order to be effective the animal has to be much larger than existing domestic cats. Is it possible to achieve this? 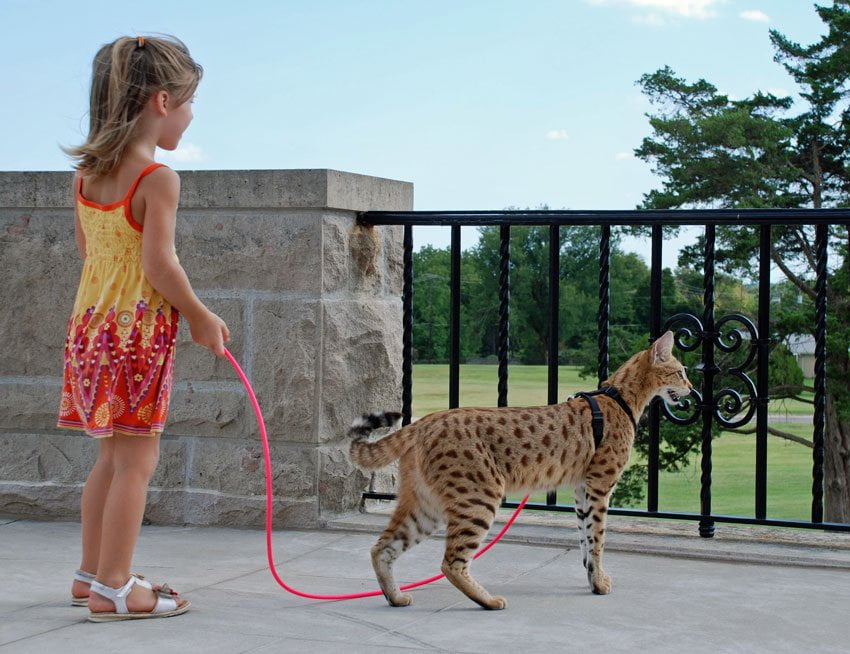 You can’t achieve this objective unless you domesticate a much larger wild cat species than the Near Eastern wildcat (North African wildcat). The reason why the domestic cat is the size that it is, is because it’s a domesticated Near Eastern wildcat. There is a limit to how large you can selectively breed such a cat. The well-known Maine Coon is the largest domestic cat breed unless you include the first filial wild cat hybrids such as the F1 Savannah cat.

The F1 Savannah cat is genuinely quite a large cat as you can tell from the video (Magic was and perhaps still is the tallest domestic cat in the world). It is certainly large enough to behave as a guard dog. The father is a serval and the mother is a domestic cat. The serval is quite a large wild cat species as you might know.

If you want to go any larger than an F1 Savannah cat you would have to domesticate wild cat species such as the cheetah, puma or leopard. It is my contention that these cats cannot genuinely behave as domesticated animals and as pets although you will see the occasional person who has a domesticated mountain lion.

There are also domesticated servals in America but again I have to say it doesn’t really work unless you want your home sprayed with urine and a cat who will do anything to escape from what is effectively a captive lifestyle in the home or in an enclosure in the garden.

To return, therefore, to the question in the title, it is not possible to genuinely breed domestic cats as big as large dogs because the wild cat species from whence they would have to come do not have the personalities to be domesticated successfully.

The reason why the domestic cat is successful is because the wild cat ancestor, is quite a pliable, affable species suited to domestication.

The answer therefore is probably NO.