There are trends with cat news and videos. At the moment, in the news for a short while is what people consider to be amusing: domestic cats being scared by cucumbers placed behind them. Judging by the success of videos showing cats being scared by cucumbers, a lot of people find it highly amusing to see domestic cats jumping out of their skin when they turn around to see a strange object on the floor behind them. Invariably the cucumber is placed behind them as the cat is focusing on something particular, usually eating his food. 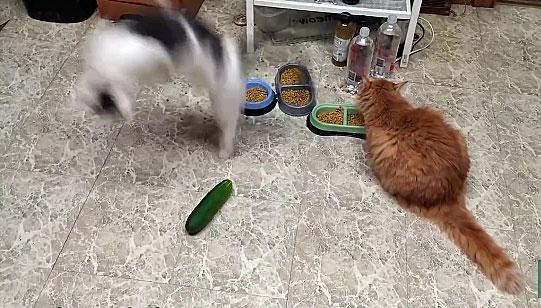 I don’t find these videos using. Perhaps I am an exception. Perhaps I’m rather peculiar. I don’t know and I don’t care. I don’t think that it is a good idea to scare your cat for your amusement. I know it is not very important if your cat is scared just the once but it is the wrong mentality to obtain amusement from seeing anyone or any animal being scared especially when that strong emotion has been engineered by the person making the video.

The reason why cats are frightened of cucumbers placed behind them is because the cucumber is a strange shape; it is object with which the cat is unfamiliar. And it suddenly appears behind them. Think about it. If something strange was suddenly placed behind us as we were focusing on something else and which we noticed when we turned around, we too might be frightened for that instant. It would be an unpleasant experience and you wouldn’t expect somebody to laugh about it. Although I do realise that some people find this amusing. Perhaps it is because I am more sensitive to the feelings of others. And I think this is the key to it. A lot of people are insensitive to the feelings of others. They are insensitive to what happens around them and the impact their behavior has on others. They are self-centred. They are inward looking if you like. It is good to be sensitive towards the feelings of others and by “others” I refer, of course, to cat companions or any other animal companion for that matter.

We do not want to stress up our cats to the sake of our amusement. Let’s think about other ways to amuse ourselves which do not rely on the unpleasant emotional experiences of others. Additionally, it a person constantly seeks to scare their cat it will backfire on the cat owner eventually as it will damage trust between cat and person and make the cat more fearful of his surroundings when the objective is the opposite.

Associated: Yelling at cats. I wrote this eight years ago.