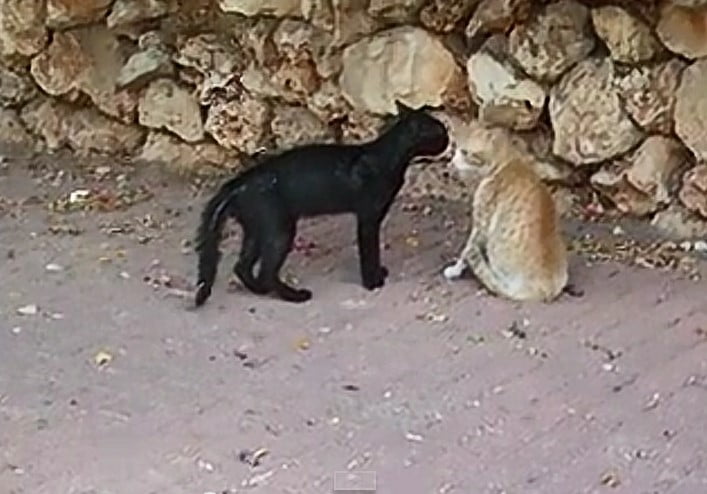 The title to this post is from YouTube and it is badly worded but I have retained it. The video maker is asking for an explanation. Here it is. If anyone can add or amend then please leave a comment.

The video shows what I’d call a sumo-style standoff to avoid a possible fight over territory. Cats do this as a preliminary to a fight but often one of the cats accepts that he/she has to leave and does so thereby avoiding a fight which can affect either one or both cats’ abilities to survive.

There is a lot of good sense in this behaviour. It settles a dispute over territorial rights through “negotiation”. It seems that instinctively one cat knows he is less able to win the fight. Or perhaps the loser of this vocal standoff accompanied by physical intimidation knows he is in the wrong.

In the video this is the ginger tabby cat and he moves away rapidly but in my experience more often than not the “loser” walks away in super-slow motion so as to retain face and dignity. It is a peculiar sight seeing the loser walk away in this slow way.

Wining is not always about the size of the cat. It is more about dominance and intimidation through character as is demonstrated in the video.

The black cat goes so far as to place his head against the head of the other to reinforce his message at which point the message is received. Often there is a couple of feet between the two throughout.

Domestic cats always make the same or similar sound when indulging in this sort of behaviour. It is very particular and specific to this situation.

An interesting aspect of this video is that I suspect that these cats know each other and may even be friendly on occasion. The ginger tabby seems quite relaxed while the black cat is committed to getting rid of the other.

Two regular visitors have a different take on this (see their comments below):

The reason why the loser of the staring match creeps slowly away is so as not to prompt the pursuit after prey instinct in the winner which would result in an unnecessary fight..

Eva says this about the behaviour:

Simple – He is a wild street cat and wants to mate because she is in heat. Wild male cats behave this way and will aggressively intimidate her into submission. He will try to use fear tactics to move her in a hidden place, away from people or other animals. They will mate off and on. Once he has her under his control-it will be difficult to retrieve her or separate them.