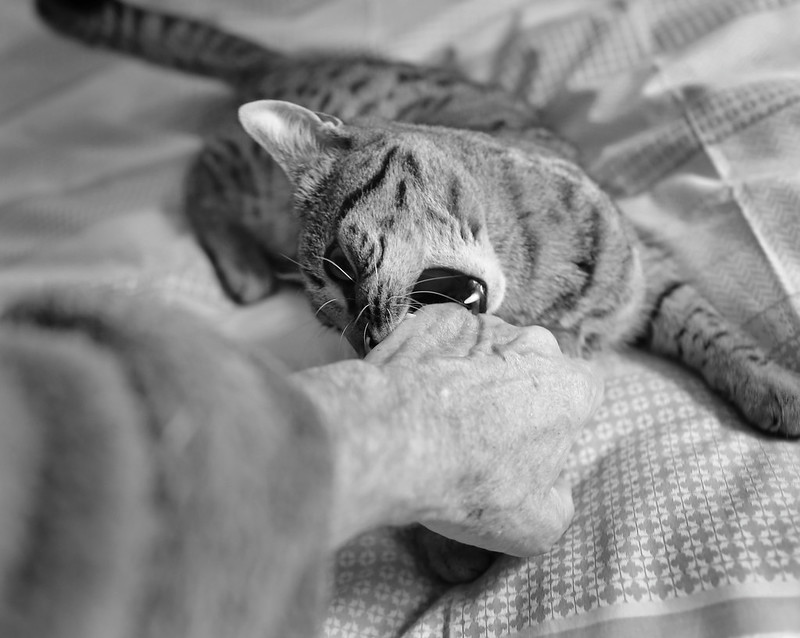 The photo above, by me, is of Gabriel who I provoked into play-biting within about three seconds! It is all normal. It hurt a little bit.

Obviously, younger cats are more likely to want to play.  I suppose we are talking about cats under the age of about 18 months.  Younger cats can be a bit impetuous and they can get involved with quite aggressive play without realising it.  Perhaps younger cats raised almost entirely by a person without the benefit of interacting with siblings may have a greater difficulty in knowing the boundaries of play and how hard they can bite. I’m not sure about that but it would seem that a litter of kittens growing up together and playing together learn how hard they can bite when playing because the recipient cat will complain if the play is too hard for him.

How does a person provoke the “play instinct” in a young cat?  Well all you have to do is push your hand onto his belly without being sufficiently gentle he may well respond by pushing away with his hind legs and then grabbing your hand with his forelegs followed by biting your hand.  The bite will not be a genuine killing bite but a “play-bite”.  Nonetheless, a play-bite can start off being quite gentle but then as your cat becomes more involved with the play the bite can become harder to the point where it will probably upset the person (i.e. it hurts!).  At that point in time a problem has been created in the relationship between the person and their cat and it is a problem which should be avoided.  I’m not saying the bite will break the skin, it almost certainly will not, but it will hurt. [In the photo, Gabriel broke the skin of my hand in minor way.]

Another way to provoke the play instinct in a young cat or even an adult cat is to call him over and then put your curled forefinger up to your cat’s mouth in a slightly provocative manner.  You can add some slightly provocative sounds and his desire to play will probably result in him play-biting your finger (this is what I did to capture the photo on this page).  The play may develop from there at his pace and at his level of aggression; in other words it may get out of hand and become too tough for the person.  People should be aware of this.

There are other ways a cat can be provoked into playing aggressively. Cat owners should be sensitive and observant enough to recognise human behaviours causing cat play.

I know that experienced cat caretakers are aware of this but people who adopt a cat for the first time or inexperienced cat caretakers may get into difficulty when playing with their cat like this.  The automatic reaction from the person may be to make the assumption that their cat is too aggressive.  Aggressivity in a domestic cat is one of the major reasons why they are abandoned to cat shelters and rescue organisations.

Children can inadvertently provoke the play response in a young domestic cat.  They may be hurt as a result.  It is essential that parents who are cat owners learn about cat behaviour and then instruct their young child on how they should interact with the family cat.

I’m sure that this will help prevent a number of abandonments to cat shelters and thereby save the lives of cats because once a cat is in a shelter, we all know that there is a distinct possibility that they will be euthanised if they are unadopted by a new cat owner.