(Hodges, SC, USA) – Please note that this is a republication of a page lost in the move to a new host company (new server). It was written in Jan 2010. It is the only lost page I have found to date.

I believe I’ve dealt with feral cats for most of my life. When I was a child and a stray cat showed up on the doorstep I would run inside and ask mama for some scraps to feed it. It was so disappointing to feed one and never see it again. That happened a lot.

I really got into helping the ferals in 1981 after I married my daughter Laura’s dad. I didn’t have mama telling me I couldn’t bring a cat inside if the cat wanted a warm bed. Of course there were ferals I knew I could tame and some I would be lucky to ever pet.

The road from feral cat to domestic cat is a long one. I begin by studying the individual cat and making a guess to whether it could become a good pet or should be left outdoors. I placed the food a good distance away next to the barbed wire fence surrounding the property. That way the cat has an easy escape if it become afraid. Each day I move the food closer to the house. 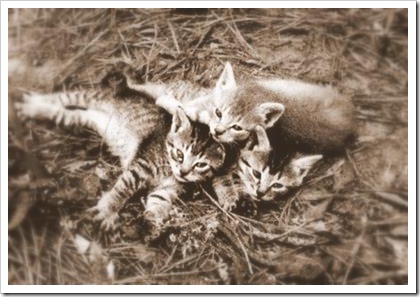 An alternative treatment by Michael – Photo by Joyce Sammons

In the beginning I sit on the steps and just watch the cat eat. The cat watches me too and I’m careful not to make any sudden movements. After a few days of sitting on the steps I make myself comfortable sitting on the ground about 10 feet away from the feeding bowls. Sometimes I’m already sitting when the feral shows up and sometimes I have to ease myself closer and hope the cat doesn’t take off over the fence. I consider it a success if I can pet the feral and the feral trusts me enough to follow me as I put the food and water out. 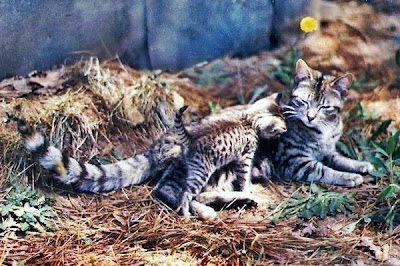 Unfortunately there is no way I can financially afford the spaying and neutering. A male cat is typically $80 at the local vet and the female is much more. There is a traveling vet in my area who offers the service for around $30 for a male.

That’s where my Furby will go. My goal is to rescue the kittens that come with the mother or are delivered after the feral shows up. I’ve never upset a feral with kittens. I’m allowed to pick them up and pet them and eventually the babies follow me around like I’m their second mama. 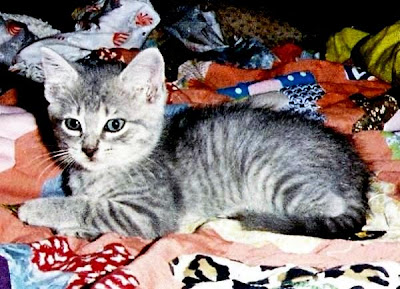 I’m including pictures of Miss Tiger and her kittens. She was pregnant when she first showed up and had the kittens in an old utility shed my dad had built back in the 1950’s. I would give anything if someone had taken a picture of me with three baby kittens following me from the storage building to the house.

I kept Silver for a long time to domesticate him. He WAS silver. I’ve never seen that color on any other cat I’ve had. He’s the kitten on top in the photo of the 3 babies.

Sometimes it’s really hard to give up a cat to a better home. I’ve always refused the idea of taking any of them to the local shelter. I’ve read articles about how people bring in a litter and the manager tells them to come back the next day because they have to destroy 3 if they take 3 in.

I use the classifieds a lot. I’ll list them as “rescued but can’t keep.” Then I wait for the calls to come in. I have the unusual gift of being able to read people by their voices. I can tell instantly who would be deserving of one of my babies and who wouldn’t. Once the kitten or cat is adopted out I tell the person if the adoption doesn’t work out they can return the animal to me at any time.

I’ve only had one come back to me and that was Whiskers. You can read about him in my story concerning mothball poisoning. I adopted him out at 3 months and took him back at 2 years old and decided he was in his forever home with me. My friend had adopted him and her boyfriend had brought a big dog into their family and she was afraid Whiskers would be attacked.

Any time I adopt out an older cat I observe the interaction between the new owner and the cat. I don’t want the cat to feel I’m throwing it away. I’m now living in the middle of nowhere and there are few ferals to help. I guess that’s a good thing. I have Furby and Lola and my cat family is complete. They are in their forever home.