Overview: The jaguarundi (Herpailurus yagouaroundi) is the most common wild cat in South and Central America. It can be tamed and is widely distributed. In has been a difficult wild cat to scientifically classify. It looks more like a marten that a cat (see a nice camera trap photograph). It is the only South American wildcat to have 38 chromosomes rather than 36. It is related more closely to the puma and cheetah that other South American wildcats.

The jaguarundi has few markings and a ticked coat. It has two main color phases: gray and red-brown. This wild cat is distributed from Mexico to Argentina and due to its wide range, it is seen in a variety of contrasting habitats from wetlands to semi-arid thorn forest. They hunt during the day and at night. Their primary prey is small in size (less than 1 kg) and it includes rodents and birds. Its plain pelt has protected it from being hunted for it skin and accordingly it is classified as Least Concern by the IUCN Red List™.

There is more to know about the jaguarundi, despite being the most commonly seen wild cat in Central and South America. At the time of publication of the Wild Cats of the World (2002) only three research projects had captured and radio tracked this wild cat. And of those only one had tracked more than three cats. The date of publication is important for all articles on wild cats because their populations and ranges are declining and shrinking – i.e. changing, making older information out of date.

Below is series of three photographs of the jaguarundi, all of which are copyright Jim Sanderson Ph.D. They show the cat with Jim and in captivity. Thanks Jim. Jim Sanderson is probably the foremost expert on the small wild cats. 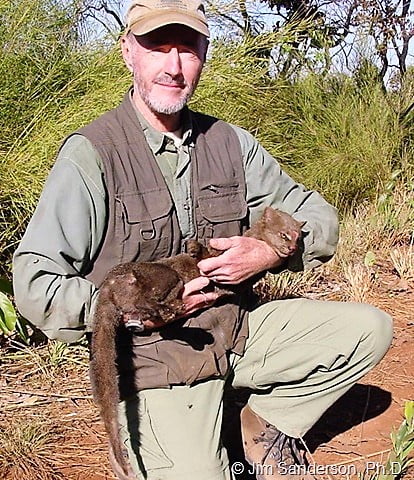 Jaguarundi carried by Jim Sanderson. Photo as per image.

To a person who might not be that involved in wildlife, this animal does not look much like a cat or at least the cat with which we are familiar: the domestic cat. Certainly, the photographs bear this out. It somewhat has the appearance of a weasel or an otter (or perhaps a marten) at first glance, but the video at the base of this page, despite being not of the best quality, show us a small wildcat albeit one with a rangy, gangly body, small head, small ears, long tail and a heavily ticked (agouti gene) coat. The heading photo below shows off the banding in the individual hairs.

The ears sit substantially on the side of the head and as mentioned are small. Perhaps a cat with ears that are almost an opposite to those of the serval. In addition, unusually for a wild cat, there are no white or light spots (ocelli) at the back of the ears, which serve a communication function (to signal an aggressive mode).

Jaguarundi head and shoulders. Photo in the public domain.

As I said the coat is ticked and there are two colour types (“phases” as the experts have called them). The colours are (a) grayish (“gray morph” – “morph” means: one of the distinct forms of a species) and (b) brownish (see above). The gray colour varies from gray with white ticking (as opposed to the yellow ticking that can be seen in the photograph below) to brownish black and sometimes black, while the brown varies from tawny to bright chestnut. The chestnut colour is shown below and the darker brownish black above.

This is a small wild cat species weighing from 3.75 kg (in Belize the lower end of weight range and a female) to 7 kg in Suriname (a female). 7 kg is 15.4 pounds and 3.75 kg is 8.3 pounds. The average domestic cat weight covers a similar scale so this cat is the size of a largish domestic cat – see Largest Domestic Cat Breed.

Jaguarundi – captive in a rock hole. Photo as per image.

The name jaguarundi is derived from Tupi-Guarani. They domesticated them, and the original form is jawarundi, which drifted to jaguarundi in American Spanish. And Tupi is actually the word for cat (yaguara) which became jaguar, and shadow (undi)…My thanks to Bearcat M. Şandor.

They are found from sea level to 3,200 metres. Their habitat overlaps with (sympatric with) ocelot, margay and oncilla. The ocelot is a threat to his species survival – see below. They are, it seems, tolerant of habitat occupying a wide range of types from semi-arid to wet grassland. The map above indicates to me, though, that this cat prefers the latter and in fact the Jaguarundi likes dense cover with some open areas and they like to hunt along the edges of open areas. As is the case for a number wild cats they like water courses (e.g., Asian Leopard Cat).

What does this habitat look like on the ground? One place which is their habitat in Belize is the Cockscomb Basin. Here are two photographs. The first (see right) was taken in Cockscomb Basin and is of a Jaguarundi that was slightly tame it seems. This is not uncommon apparently as they quickly become tame and friendly.

The Jaguarundi preys, mainly, in the daytime – diurnal (4 am to about 6 pm) and on the ground. The opposite is “nocturnal” meaning night time. In common with all wild cats, they are agile, athletic, good jumpers and good climbers.

Jaguarundi in the wild. Photo: as per image. 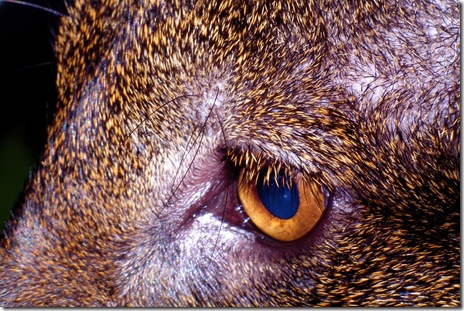 Assessment is classified as Least Concern (LC) as at 2022.

The Red List justifies this classification as follows (summarized):