The conventional view states that Japanese Bobtail cats have a very long history. Perhaps a thousand year history. And by that I mean this type of cat has been a domestic cat in Japan for a thousand years. But is it true? Well there are two pieces of evidence that says that is might not be. 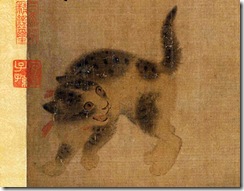 The painting is about 1000 years old. It is very finely painted. The artists of the Northern Sung (960-1126) sought naturalism and realism so we can take it that these kittens looked like this. The monkey on the right has caught a kitten (perhaps a sibling of the one on the left who looks apprehensive and aggressive). The monkey is chained up. Perhaps this was a courtyard scene and the semi-feral kittens walked past the monkey and he caught one.

For me this painting is interesting because of the appearance of the kittens. They appear to be grey tabby and white. The tail is short but not a pom pom tail that is the hallmark of Japanese Bobtail cats. Also, what appears to be missing is the bicolor or tricolor (calico) markings. But the potential for the classic markings and bobtail are there.  Also the compact and spare body of Japanese Bobtail cats also seems to be in evidence. But the bottom line assessment is that this cat is not a Japanese Bobtail cat by today’s standards. 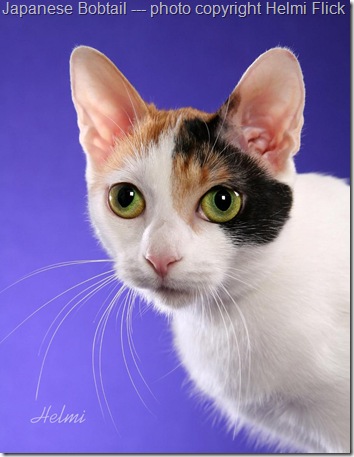 There is some very interesting science about the genetics of modern purebred cats and their relationship to their geographic origins in this report: The Ascent of Cat Breeds: Genetic Evaluations of Breeds and Worldwide Random Bred Populations.

It is quite a heavy document to read so I’ll just focus on the Japanese Bobtail cats bit.  The relevant conclusions are as follows:

Does this mean that the Japanese Bobtail is not Japanese at all? Or does it mean that this breed has been developed so conclusively in America and Europe over ….years that the original genetic make up of the cat has been obliterated?

Maybe I have missed something but it seems that the Japanese Bobtail is no longer or was never a Japanese cat. Explain that one. Of course this supports the painting above.

It would have been nice but fanciful to have seen the artist Yi Yuanji paint a cat similar to the modern Jap. Bob. and to have read that modern Japanese Bobtail cats have a genetic make up (genotype) that is directly related to the Asian cluster. But no. It is much muddier than that. The only clear domestic cat breed history is that of the created breeds, the hybrids.

Incidentally, if you wander around Japan today you will see your typical feral/stray cat that has absolutely no resemblance to the famous Jap. Bob. Please see some fine stray cat pictures by MAR taken in Japan. However, the heading photo was taken in Japan and the looks like a non-refined (perhaps non-purebred)but highly genuine Japanese Bobtail.

Further evidence is in a drawing of a cat by Toba no Sojo (1053-1140).  The drawing is of three cats with normal length tails. In the 18th century due to a genetic mutation, cats with short tails become more common. It seems that the short tailed cat became synonymous with Japan over the intervening 200 years. An area, in Japan, where they seem to have been more common was Naniwa (Osaka).

Imaizumi Tadaaki calls the Japanese Bobtail “genetically inferior”. It depends on the criteria. On the basis of the research paper above this is incorrect if health is the prime concern.

The painting illustrated is in the public domain due to lapse of time and is a Wikimedia Commons file uploaded by Vmenkov.