On reading the Times newspaper on 27th January 2011, I learnt that the famous American author J.D. Salinger (The Catcher in the Rye) lived with two Russian Blue cats. What does this tell us about the man? Can we deduce something about a person from the type of animal companion that they live with? Remember, you normally buy a purebred cat and that means exercising choice.

We can certainly deduce something about the character of people on the basis of whether (a) they don’t keep a companion animal or (b) whether they keep a cat or a dog. Men tend to prefer dogs as men tend to be pack animals (as are dogs). Intelligent women tend to keep cats as they are more independent minded. But this is very much a rather crude generalisation.

Before J.D. Salinger lived with Russian Blue cats he kept two Italian grey-hounds. They were killed in a fire at his home in the early hours of the morning. Mr Salinger jumped out the window with his wife and escaped unharmed. He whistled for his dogs throughout the night to try and find them but they had been overcome by the fumes.This information has come to light in letters between him and an English friend, Donald Hartog.

So, Mr Salinger liked dogs and cats; animals in short. He liked zoos. One of is favourite places in London was Regent’s Park where London Zoo is located. He visited Whipsnade Zoo north of London. Regent’s Park is also a very elegant area of London. On the east side there are rows of highly desirable white stucco buildings and there is a grand crescent on the south side. It is symmetrical and ordered in appearance. The grey-hound is a very elegant looking dog with a pleasant temperament. The greyhound is not a barker. They prefer quiet homes and are loyal, quiet and gentle.

The Russian Blue cat is a very elegant slightly slender (foreign body conformation in cat fancy language) purebred cat. They are said to be “sweet, gentle and shy by nature”2. Can you see a picture developing as to the kind of animal and person J.D. Salinger prefers and is therefore himself? The Russian Blue is a popular purebred cat but to the average cat keeper a rare cat. And J.D.Salinger always kept two of the same breed of animal. This must have been for the companionship of the animals. He was thinking of the dogs and cats.

In his famous best seller, The Catcher in the Rye he tells in the first person a sort of autobiographical story of his childhood through the character of Holden Caulfield, a sixteen year old who “expounds on the importance of loyalty, the “phoniness” of adulthood, and his own duplicity”1.

Salinger liked quiet, gentleness, truthfulness, loyalty, elegance and it seems simplicity. You can find all these in Russian Blue cats! Pretty much any cat, in fact (the Siamese is too vocal!) but the purebred Russian Blue having a coat of only one color, dilute black or a blue-grey, is particular elegant and stylish. Another quiet cat he might have liked is the British Shorthair, which is also a popular cat especially when the coat is blue and which has a silent meow.

He didn’t like the media or publishers, probably because they pried into his privacy, which was protected by his neighbours in the tiny community of Cornish in New Hampshire. He got on with the people he knew. The media speculated and divined a character that was not the man. He liked to write but didn’t like the consequences of being published – publicity.

The unearthed letters debunk the myth that Salinger was an irascible and difficult misanthrope. He was charming and warm and he liked animals. Anyone who genuinely likes animals is good in my book. It is not possible to be bad and like animals.

Photo: The photo of J.D. Salinger is not copyright free but is published under fair use and the rationale for this is the one adopted by the Wikipedia authors on the page:

2. Legacy of the Cat

SOME MORE ON RUSSIAN BLUES:

There are four grey cat breeds. These are cats that the cat associations say must be grey. In North America ...
Read More

Russian Blues of Russia and America

This is an attempt to make a comparison between how Russians breed the Russian Blue and how Americans do it ...
Read More 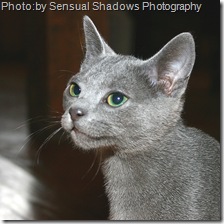 There is a list of breeders of the Russian Blue cat in an embedded spreadsheet below. The purpose of this page is ...
Read More
Please comment here using either Facebook or WordPress (when available).