This article is about Jean Mill who is probably the most famous cat breeder in the history of cat breeding. It was written in around 2010. At the time the lady was still alive and I believe she still is at 2018 but I don’t have information on this. Wikipedia says that Bill Engler decided on the name of the breed and the American Cat Fanciers Association was the first to recognise it.

Jean Mill Bengal cats she used in her breeding program

As a lot of us know, Jean Mill (maiden name: Sugden) is considered to be the founder of the Bengal cat although others were involved in its development. When Jean Mill was a child her mother would insist that her cats were kept outside. And this is still the case for Mrs Mill as her husband is allergic to cats so all Mrs Mill’s cats are kept in zoo like conditions outside in 10′ by 10′ cages, with exercise wheels and access to a yard. Some people might find this distasteful. There are other aspects of her cat breeding methods that might raise eyebrows. The Bengal Cat origins (new window) are not as beautiful as the cat in my view. This is deliberately a bit provocative. 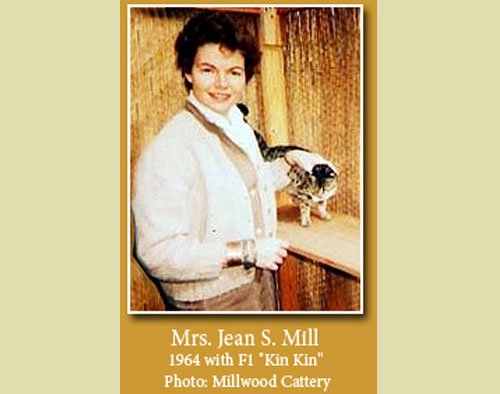 She makes it clear that the character of the Bengal cat must be sweet and non-aggressive. There are 2 reasons for focusing on this. First, the purpose of the breed is to bring together the superb appearance (particularly the coat pattern and color) of the wild Asian leopard cat and the domesticity of the modern domestic cat. The end result really must be a clean combination of the two. Secondly, TICA will disqualify Bengal cats from the show if they threaten harm. The fear of the authorities in the car fancy is that this is, it seems to me, a breed “too far” and that the cats will be aggressive. In response breeders have committed themselves to ensuring that any aggression has been gradually bed out.

It could be said that Bengal cats are now more reliably sweet natured that some other breeds. Fourth generation SBT (Stud Book Status) Bengals are 100% domestic cats and will allow strangers to carry them about. There would it seems still be some fears amongst people that they are wild and dangerous.

Mrs Mill started two lines of of Bengal cats. The first in 1963 and the second in 1975. The story behind the 1963 “breeding” is interesting. Jean Mill bought her first Asian Leopard cat (ALC) from a pet shop (things have changed a bit). She put in a large cage (as she does now). At that time she was married to her first husband (who sadly died in 1965) . Question: was he also allergic to cats? Anyway, Mrs Mill compassionately felt the Asian Leopard was lonely and provided a black Tom cat and bingo despite the experts thinking otherwise they mated to produce a female offspring who was not sterile and produced more offspring. That though is where the breeding line ends as Mrs Mills had to discontinue her breeding program at that time having moved into an apartment after her husband’s death.

She restarted in 1975 and there is a nice story behind this as well. Mrs Mill knew a physician who was doing research into immunity to feline leukemia. ALCs allegedly have a partial immunity and the physician was breeding them with domestic cats (I guess to see if the domestic cat could be correspondingly more resistant as well). He let Mrs Mill home his ALCs. Also she managed to arrange the “export” of a domestic street cat with leopard markings from India. She used him with the female hybrids. She called him Millwood Tory of Delhi. He is one of the founding cats of the Bengal pedigrees. He is stocky and has that unneutered male appearance…

Note: As mentioned there is one thing about Jean Mill that I personally don’t like. As is normal for cat breeders she kept her breeding cats in a cage. I presume it was a permanent state of affairs. It might sound okay to a lot of people but to me it is downright cruel. Just a thought.