These are two feral cats adopted by my friend Gigi. Her first two, Frank Sinatra and Nunu weren’t truly feral. Willie and Joey were. They came bounding down Gigi’s hill one day, together as kittens, and they’ve been there ever since. Willie got his name because to this day he gets the “Willies” when you get too close, but after 2 years, Joey will let Gigi stroke and hug him. 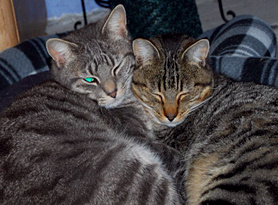 Their full names are Joey Bishop and Willie Nelson. Even as kittens they were very frightened of humans, but they instinctively knew where the food was. After skulking around for months, Frank Sinatra took the kittens into his capable tutelage, and fathered them into becoming part of the whole family. Gigi never saw the mother cat, or any other kittens. These seem to be the only ones who survived. They are living the good life now on the Gigi plantation, with two dogs and two other cats. What a life it is. There is fresh catnip growing in the garden, lots of shade in the summer, and lots of warmth in the atrium in the winter. While most of the animals join Gigi in her bed at night, Willie still prefers to be the voyeur from the safe view of the skylight (see picture below). That is close enough, thank you.

Frank (see below) tries to convince Joey that it is much nicer to be IN the house all of the time, as in this little demonstration of comfort and joy: 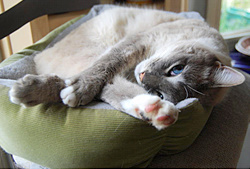 But alas, Joey likes to keep his distance. But he loves his brother, and he loves his fellow house animals. But just don’t try to pet him.

I don’t know how there could be any feral cats, especially with people like Gigi, Bob, Ruth, Barbara and their crew around.

Joey and Willie to Feral cats