Josef in the English Snow

January 2010: OK so we have a lot of snow and more keeps on coming but it's no excuse for our Walter to stay indoors when he's got no nursing duties now. See, I even got up on the wash house roof where we like to sun ourselves in the nice weather. 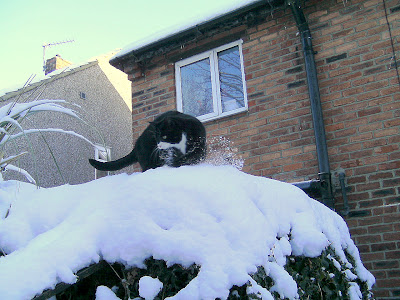 Jozef in the snow - photo Ruth

Mind you I had a bit of a panic about getting back down as the runway and the platforms were thick snow and coming back down looked much dicier than going up!

I wasn't showing off going up, I just wanted to show our lad I could do it. Our late Uncle John built it all for us when there was 4 of us and sometimes we sat on one level each. 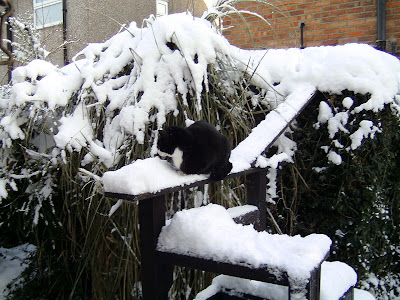 Jozef in the snow - photo Ruth

Our girlz were good sports, I bet they'd have gone up with me. Anyway I called upon one of our "servants" (a poor human!) and she cleared a way through the snow for me and as you can see I'm safely down and back inside and writing my memoirs.

Hi Jozef... I hope you don't mind but I changed the title because "wuss" is not well known in the USA or hardly known! As far as I know. A lot of visitors are from the US. Note: "Wuss" means weak, soppy, silly, without courage, in England. Walter was a wuzz.

Great photos. I would love you to send me some by email so I can put them on page a bit bigger. Please send to:

Josef in the English Snow to PoC Forum