Keira’s cats are loved cats. Keira and her family live with some very nice and interesting cats. Heading the list is a cat that you may have already read about; the rare, awesome and very special, Striker, an F1 Bengal cat of real presence and fabulous personality. Not only is Striker an extremely impressive cat to look at he is also an extremely useful cat as he is a therapy cat. To remind you what he looks like, just below is another picture. You can read more about him on this page: F1 Bengal Cat Callista Strike Force. 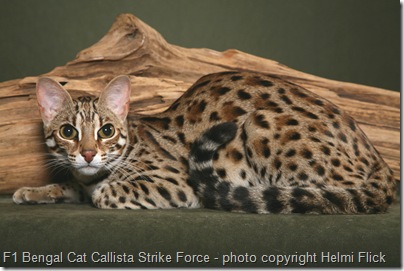 Striker takes part in The Dillinger Gang Therapy Cat Workshops, named after the

founder of the The Dillinger Gang Therapy cat group, RW (Regional Winner) SGCA Mystre Dillinger Total Rebellion, who is an 8th generation Bengal cat and who is part of the family of cats that I have called Keira’s Cats.

Dillinger is clicker trained and harness trained. Both he and Striker work with kids in the schools and in nursing homes where Keira lives and with special needs children as well (see photo above right – click on the pic for a larger version).

Dillinger comes from Texas breeder Mark Pennington. Here he is: 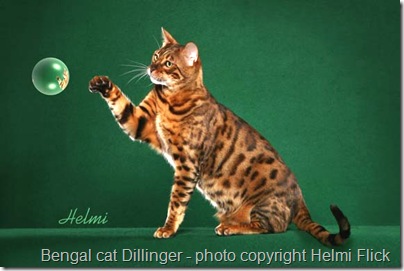 OK, that’s the Bengal cats. Next up is a beautiful Abyssinian by the name of Pentaclecats Night Star (named after the Warrior cat Night Star). This champion, female, Abyssinian cat with a ruddy coat, was a gift to Keira’s oldest daughter, Malina, from Rene and Clint Knapp in Connecticut. Rene and Clint kindly mentored Malina through the TICA Junior Exhibition Program. Here they are together: 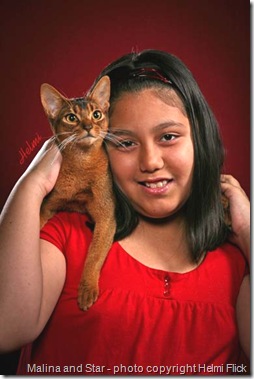 Serina, Keira’s younger daughter at 10 years of age (at March 2010) was also the recipient of a gift from Rene Knapp who gave her a gorgeous long haired Munchkin. Below is a photo by Helmi Flick of Keira’s daughter NEJE Serina Kim-Linh Nguyen with KungFu Panda:

Not surprisingly, Panda is dearly loved by Serina. Munchkin cats can be addictive. I am reminded of a similar story: My Munchkin Experience. Also you might like to see Munchkin cat.

Now, not all of Keira’s cats are purebred. Keira was involved in cat rescue and the family has a lovely Siamese mix by the name of Lady Annie. This cat, that became a Supreme Champion was found, believe it or not, in a dumpster! More particularly the Sommerville Dump in Massachusetts. She was four weeks old at the time, flea ridden, ill and with an eye infection. Annie was adopted at a Petco Adoption Day. She was healthy and spayed (but shy) when Keira adopted her thanks to the efforts of the Charles River Feline Rescue Group (that incidentally is no longer in existence). Lady Annie’s name reflects her rise from dumpster cat to show champion, from orphan Annie to a Lady! Here she is: 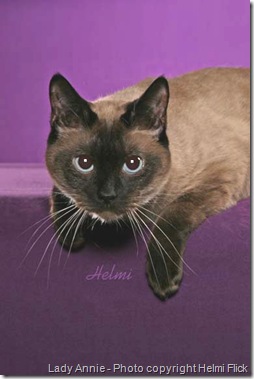 Keira’s cats expanded a bit more when the family adopted Comet from Petsmart. Comet was an angry cat, it seems, having been neglected by his previous owners, who gave him up. An earlier rehoming failed as he was “too rough”. I guess Keira, being a true cat lover developed a soft spot for him. And relishing the challenge to prove that Comet could be successfully socialised (Keira knows how to socialise cats) she went on and did it. Comet is now a fully integrated family member ready for his first cat show (TICA Show in Milford, MA on April 2, 2010 ) and a part in a film!  Here is Keira’s  SH Maine Coon Mix Rescue “Halley’s Comet Of Foreverland”: 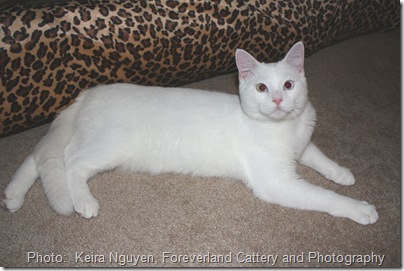 Lastly but not least, there is Kisses who was found on Petfinder.com with her twin sister in a high kill shelter on the verge of being put to sleep. Keira says, “We were looking to add to our family and wanted only one but couldn’t bear the thought of either of them dying so we had them transported to NY.” 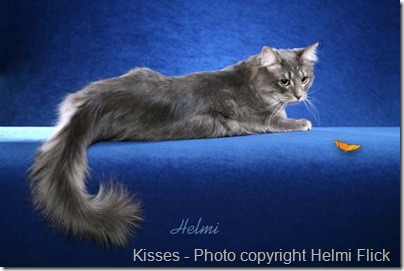 Keira thought a that she would die before she got Kisses home of a severe respiratory infection. Both Kisses and her twin “Hugs” had the infection.

Anyway, her true cat lover commitment came through and Keira and family nursed Kisses and Hugs back to good health and much more.

Kisses is a show cat as well. She is another classic rags to riches story becoming a two time RW (Regional Winner) and SGM (Supreme Grand Master) before retiring. This again was another “Happily Ever After Story”..

Thanks Keira for letting me write about Keira’s cats.

From Keira?s Cats to Bengal Cats