“Descendants of the monstrous man-eating lions of Tsavo in Kenya, that devoured dozens of railway workers in 1890s, blamed for new attack.” (journalistic hype) 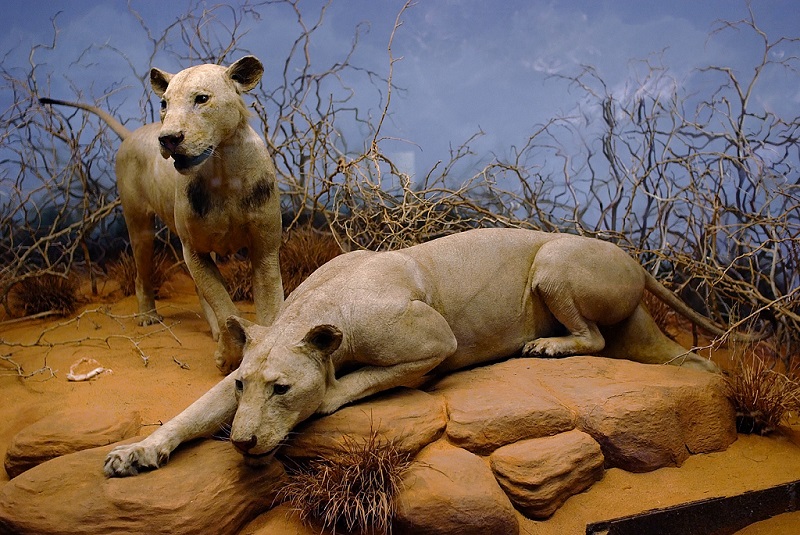 The original Tsavo man-eating lions are immortalised in the display above at the Field Museum of Natural History in Chicago, Illinois.  Now, it is said that their descendants are back to strike terror into railway workers who are constructing a replacement to the pioneering colonial railway known as the “lunatic line”, constructed more than 100 years ago.

You may have heard of the Tsavo man-eating lions.  Their exploits have been exaggerated but according to popular legend up to 135 people were dragged from their camps at night by a couple of maneless, male lions, never to be seen again.  Many of the people were Indian labourers hired to build a bridge over the Tsavo River.  All this occurred in 1898.  The lions were killed by Col John Henry Patterson, the railway’s chief engineer.  A film was made of his exploits in 1996, The Ghost and the Darkness, starring Val Kilmer.

One of the Lions of Tsavo

The new replacement railway in Kenya is being built by Chinese workers at a cost of £2.5 billion.  They are being stalked by the descendants of the original lions!

Kenya Wildlife Service (KWS) reported that a wildlife ranger was mauled the night before President Kenyatta arrived to check out progress.  The Ranger had been guarding the site which, incidentally, is 100 miles north-west of Mombasa.  He had fallen asleep.  The lion crept up on him and placed the ranger’s head in his mouth and then dragged the poor man a few metres into the bush causing serious wounds to his face and head.  Eventually the lion was scared away by firing guns into the air.  The victim was taken to a nearby hospital and is apparently doing well.

The original Tsavo lions got a bad press.  In 2004, a study by American scientists concluded that the man-eating lions only attacked around 30 people rather than the 135 reported at the time.  People do like to exaggerate when it comes to man-eating big cats.

Man-eating big cats only turn to man-eating when they have to.  My reading about lions and tigers who attack humans clearly indicates to me that the reasons for developing this habit is because of a shortage of prey or because the animal is injured or sick and therefore unable to prey upon it’s usually much larger animals.  The cat seeks soft targets and what better than a human being! The cats do, however, get a taste for human flesh and continue.

It has been suggested that the original lions preyed on people because of a recent plague of rinderpest which had decimated their usual prey: buffalo and cattle.  Another theory is that the burial customs of Hindu labourers at the time attracted the lions to scavenge because the custom was to cremate their dead in the open.  A third theory was that ancient slaving caravans used to dump their dead where they fell thereby attracting the lions to scavenge upon dead humans.

However, Tanya Saunders of the Tsavo Trust said that:

Apparently 3 to 5 people are lost every year to lions, annually, in a place called Kone.