Kittens who inherit a personality which is bold or confident are more likely to be perceived as friendly. Relatively bold kittens are more likely to interact with new objects and occurrences. This gives the impression that they are more friendly or at least they’re more outgoing. Also, it means that they learn more quickly because they become socialised more quickly. And in being socialised more effectively they become more friendly to humans. The point is though that although timid cats will give the impression that they are less friendly they are not inherently less friendly. It just means that they are a little backward in terms of being socialised.

Some associated articles: The article continues below.

What sort of human personality does a domestic cat prefer?

I want to try and get into the head of domestic cats and ask what sort of human personality type ...
Read More
Neurotic people are poorer cat caregivers than agreeable people

I think that this scientific study is telling us what we probably already know but it has some value nonetheless ...
Read More
Do narcissists hate cats?

I think we are referring to domestic cats. And I also think that trying to answer the question is fruitless ...
Read More
All domestic cats suffer from Asperger’s syndrome? Discuss.

The idea that all domestic cats suffer from Asperger's syndrome is based on their character. The domestic cat character is ...
Read More

This is probably common sense because timidity is not automatically associated with unfriendliness and neither is boldness automatically linked to friendliness. It’s a question of how confident a young cat is to learn and enjoy new experiences. And this leads to the inevitable, namely that more confident cats tend to be adopted over more timid cats. They appear more friendly and also, they are more likely to approach a new person. When a person is adopting a cat, they allow the cat to choose them because they feel it is a more certain way of selecting the right cat. In essence the cat takes charge.

It’s an interesting thought because it may well be the case that a timid cat is the better cat for a person who wants to adopt. For example, a timid cat is more likely to be happier staying at home i.e. full-time indoors. A lot of people want that kind of cat because they are inherently safer. This brings peace of mind to the cat’s caregiver. And there are more full-time indoor cats nowadays. It is a growing trend. Perhaps a shy, risk-averse person should adopt a shy cat?

And I think you will find that the sort of cats who are more likely to be run over on roads are young, bold male cats. I think it is useful to have a timid cat sometimes, a cat fearful of strange things such as vehicles travelling along roads. You want a cat to run away from that. Of course, I’m talking about indoor/outdoor cats but there are still lots of them.

The photo below is of a kitten called “Focus”. He is a very confident, first filial Savannah cat. It was taken many years ago. I’d expect that he is now a calm adult cat. But bold and involved. 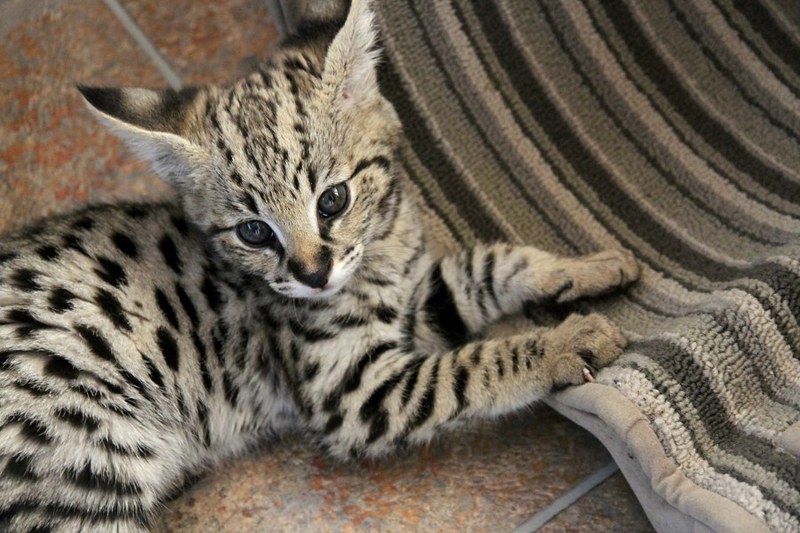 In a study it was found that kittens with confident fathers i.e. they had inherited their father’s genes in that respect, approached people more readily and as a consequence they learned how to interact with people and therefore became socialised more rapidly. This made them more friendly. Shy kittens took longer to achieve the same level of confidence around people. But they can catch up if given enough handling and become just as friendly as the bold kitten. Although they are more likely to retire back to their natural personality and become more reticent around people if they were not handled regularly. Also, they show their friendliness in a less pushy way.

Once again, this kind of cat behaviour can be attractive to certain people. Dr. Bradshaw studied cat behaviour before and after they were fed. In a throwaway line in reporting on his study he said that cat owners tended to prefer cats who were not so demanding i.e. vocal when being fed. It seems that the majority of cat caregivers don’t want their cat to be overly demanding at feeding time. But this is a human personality trait because some people quite like that vocal behaviour in their cat companion (Siamese are the frontrunners).

But it is probably fair to say that if a cat is too bold and therefore too pushy it may irritate on occasions. I guess the point I’m making in this article is that people tend to adopt confident cats for the reason stated but they shouldn’t rule out the shy ones. They have a place in human society and they will please many cat caregivers more so than the bold ones.