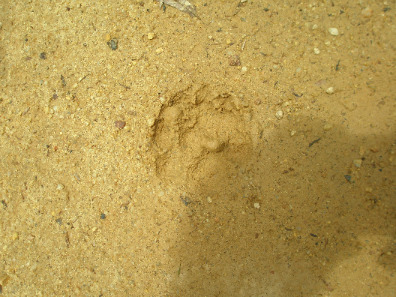 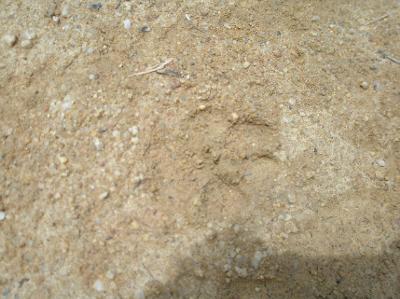 I was recently on the Thai island of Samui. I was riding a rented dirt bike in some very remote areas and I came across some tracks that looked to me like cat tracks.

They were about 3 inches wide, roughly about the size of my palms.

I first assumed they were made by a dog, but then noticed the lack of claws on any of the tracks.

I was able to photograph two of the tracks, but with my point and shoot camera the photos are not very good.

The one print that was in mud was a double print, where the back paw had stepped on the front paw print. The other print was in a sandy area and thus not as defined.

I have seen on some maps of the Leopard Cat's range that they are found on mainland Thailand in Surat Thani, very close to Samui.

Is it possible that I saw tracks from a wild cat on Ko Samui?

Hi John... thanks for dropping by.

As the ranges of wildcats is not totally settled or at least constantly evolving (usually getting much smaller and more fragmented) it seems to me that it is not beyond the bounds of possibly that the tracks could be those of the Asian Fishing cat provided the habitat is suitable on the island as this island is within the general range of this small wild cat too. See Asian fishing cat range.

The Asian Golden cat (see range) is another that could be on this island as its range "surrounds" the island although it is fragmented.

Perhaps you have redrawn the range of one of these small wildcats. The IUCN Red List does not mark out this island as part of the range of any of these cats but they would admit that they don't have all the answers although they are the most reliable source for wildcat distribution.