It’s catching on: the new cat craze.  You call the police and tell them that you are locked in your bedroom because your cat has gone berserk and you’re terrified.  Do you remember Lux, the vicious black-and-white Himalayan cat that went berserk and which Jackson Galaxy had trouble figuring out why? We have a new one! Bizarre. I think it is a copycat publicity stunt 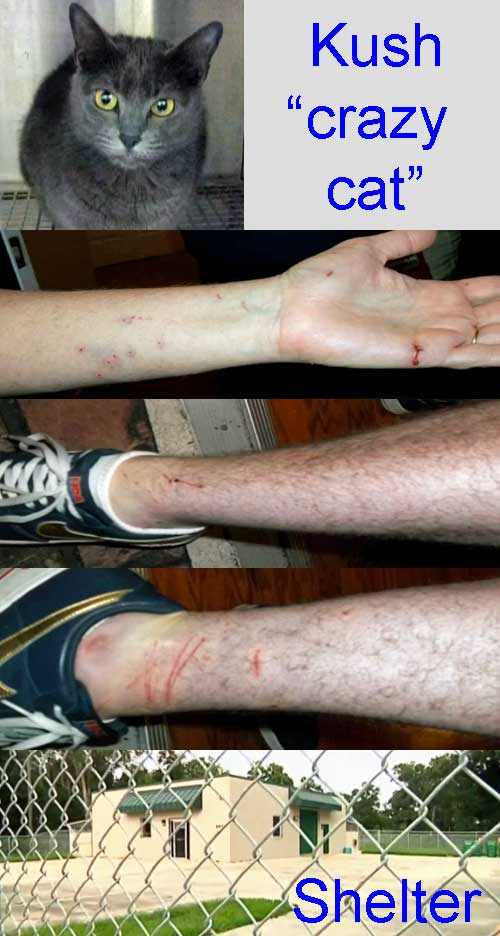 Well, this time we have a Russian Blue (purebred, pedigree) 4-year-old cat named Kush living in Deland, Florida, USA, who is now in quarantine for 10 days at an animal shelter because the owners Teresa and James Gregory telephoned the police saying that their cat had scratched and bitten them on their arms and legs and that their cat had freaked out.  Mrs Gregory said that her cat forced them to lock themselves in their bedroom.  She said that their cat had never been like this before. The quarantine is 10 days to assess for rabies as the cat is not vaccinated. It looks bad for the cat.

“I just crawled about my crazy cat…  She tore me and my husband up.”  Mrs Gregory in her call to the police.

What happened is the question in the minds of any curious cat lover?  Ms Gregory said that she took her cat to the vet about 6 months ago to get everything done (I wonder what that means).  The veterinary clinic called her to say that her cat had freaked out on them and that they were unable to treat her.

She also says that she had mistakenly trodden on her’s tail earlier in the day of the so-called attack.

Now Kush is in this shelter waiting her fate which is either to be taken home which appears to be unlikely or to be re-homed or euthanised.  This is more or less what happened to Lux.

Is this some sort of news media conspiracy to denigrate and belittle the domestic cat? Perhaps not. There are some reporters on these online newspapers who wish to write these stories which give the impression that the domestic cat is a crazy, aggressive and dangerous animal. How did they find out about this? The police must be feeding the information to the press.

We’ll have to ask all the same questions again namely is this cat declawed and in discomfort, is she in pain for some reason or other, is the environment in which she lives hostile making her nervous and stressed resulting in aggression or is she being mistreated? Kush is clearly a fully domesticated cat because she is a purebred cat so the behavior cannot be a lack of socialisation.  Something happened.

As before with Lux the problem either is medical or behavioural.  I lean towards behavioural because that is the most common cause of this sort of aggression and I very much suspect that Kush was mishandled which is the reason why she scratched Mr and Mrs Gregory.

We need to know more details.