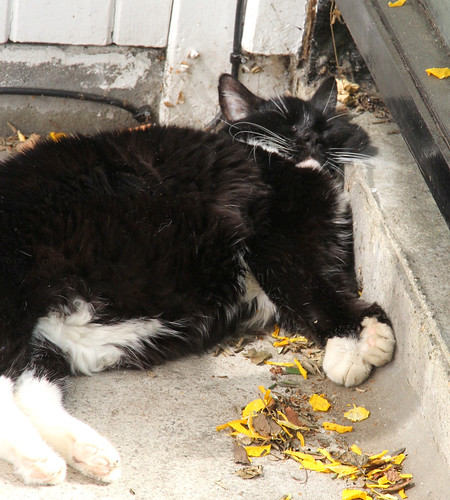 Is the domestic cat lazy? If so, why? Perhaps the domestic cat is just more sensible than us. And laziness is thrust upon them. Lazy cats make good videos and pictures and there is quite a bit of talk on the internet about them but it makes me think. It makes be a bit philosophical. This is the serious side of lazy cat information. The obvious reason why domestic cats are lazy is because we make them that way.

Definition of the Word “Lazy”

I think it helps if we check out the definition of the word “lazy” before continuing. The definition is: “disinclined to work, activity, or exertion…” This definition leads to a certain conclusion as why there are so called lazy cats.

Excluding humans, do animals work because they need to or because they want to? The former must be the answer. For a cat “work” means hunting prey. As we feed cats there is no need to hunt (although despite that some do).

The other form of activity that cat’s might participate in is play but that depends on us again. We dictate how active our cats are. We decide to play with them or not. We decide to keep them indoors or not. And we decide to leave them alone, indoors, while we are away. A lazy cat is not really being lazy, just waiting for us to interact.

The very early domestic cat, say the precursor to the Maine Coon in Maine in the 1800s would have been a farm cat; a useful mouser. He would have been semi-domesticated and he would have hunted rodents and made himself useful. He would not have been a particularly lazy cat although he may have found plenty of time for rest because he was an efficient hunter.

Modern domestication of the cat has made the cat ever more lazy. It is due to us.

Wildcats are anything but lazy. The small wildcats are generally very active and some e.g. the sand cat will hunt all night and travel 18 kilometers in doing so. This is hard work and the opposite to lazy. The African wildcat the wildcat ancestor to the domestic cat probably spends the best part of all night hunting while resting and hiding during the day. This cat was domesticated by the Egyptians as a working cat to kill rodents and snakes. The African wildcat kills cobras, saw-scale vipers and sand boas – certainly not a lazy cat and certainly no lazier than modern human.

If a wildcat is lazy it is because he or she is very efficient and successful in catching prey or prey is abundant. Wildcats will do what they have to do to survive and beyond that it is logical to sleep and rest after eating.

Lazy Cat on the Treadmill 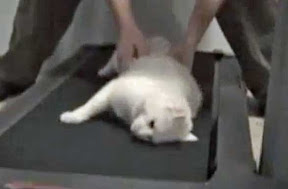 The lazy cat on the treadmill video is a classic example of a lazy cat (see below). However, I don’t quite see it that way! I wouldn’t.

This cat probably doesn’t recognise the treadmill for what it is, a moving floor. He probably sees it as a static object and thinks that he is being picked up and put down on it. He is obviously a very laid back cat and so does not even bother to stand on the treadmill or perhaps he was a bit sleepy when the videoing was started. Or when being picked up he is used to being put down on a place where he can sleep – a form of training.

Humans need to work and/or be active mentally and physically to stay healthy – ‘Devil finds work for idle hands’. Cats don’t suffer from this phenomenon.

Cats do what they have to do to survive. Many humans do the same. It just takes a lot more work for the human to survive in the modern world than it does for the domestic cat who is cared for by a human. This is why we see a lazy cat. They have neither an artificial desire to be active nor a need to active. Perhaps a cat would look at us and think that we are chasing around like manic headless chickens. It is just a matter of perspective.

People need to work. It is strange but our mentality dictates that we are doing something; that we have a purpose. We need this. If you don’t think that you do, you are wrong! This may be a weakness in the make up of the human. Even when people are retired from work, they may not feel like doing much but they still need to do something. It is a survival strategy. We are programmed to work or it is indoctrinated into us at a very early age.

Cats don’t have this weakness. I call it a weakness because life would probably be better if we didn’t have this need.

All cats are more or less the same in respect of their renowned or perceived laziness. Although some types of cats or some cat breeds are less lazy than others.

Some cat breeds are open to the criticism of being called lazy. But are they? The Persians come to mind. They are thought of as static and less inquisitive; a part of the furniture. At the opposite end of the spectrum is the Bengal and Savannah cat breeds. These are wildcat hybrids. They are known to be more active due to the drive that comes with being part wildcat and a higher intelligence.