The Chinese call this cat species, “money cat” (錢貓 – chinch’ien mao) because the spots look like coins. The leopard cat is relatively slim in build. Its size and coloring varies substantially. The Asian leopard cat, as it is sometimes called, is about the same size as a domestic cat although over its range of sizes, on average, it would be similar in size to a small domestic cat. In addition, the leopard cat’s head is relatively small. The larger individuals of this species inhabit northern China and the Amur region of Russia. The smallest are found in Southeast Asia. Weights are also seasonal: higher in winter than in summer.

The leopard cats in the northern regions are “pale silvery gray”. Those in the south are darker – “ochre yellow brownish”. The photographs clearly show the tawny upper parts of the body and the white underparts. 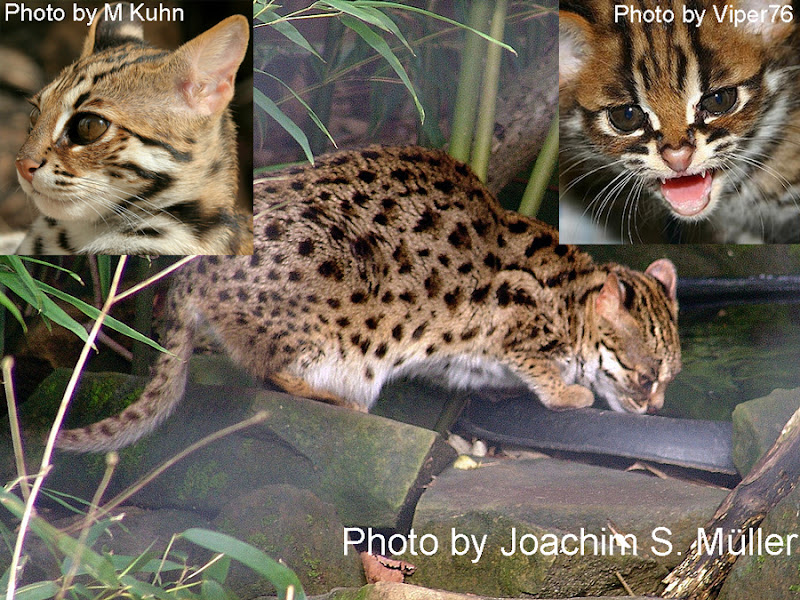 The muzzle is short but about average for a domestic cat and its eyes large and dark. The ears are standard sized and rounded with the classic ocelli light spot on the back of the ear flap. The tail is about half the length of the head and body and spotted with faint rings near the black tip.

The black spots are high contrast and vary in size and shape. The face has the highest contrast markings. The twin, parallel, dark, lines that run across each cheek forming a sandwich with white between then, mirrors the pattern design of the rusty-spotted and black-footed cats. The whisker pads and the areas around the nose and eyes are white. There are two high contrast lines running from the inside of each eye to the back of the head, which encompass broken lines and some lighter fur that follow the same path. Sometimes the leopard cat is mistaken for the fishing cat because of the similar facial patterns but the latter is much larger. Notwithstanding that, both love water.

Sometimes the black spots join up to form lines. Along the back there are 2-4 rows of black spots.