The leopard habitat depends on where it is so the first map shows the leopard range (distribution throughout the world).The range is the widest of all the wildcats but it is, as you can see shrinking rapidly. The red is the “historic range” (courtesy Wikipedia® user: Altaileopard- I believe this to mean from before 1996 but they are unclear) and the cyan lined areas are what is believed to be the true leopard range as at Sept. 2009. It comes from the IUCN Red List of Threatened Species™ (Red List) website. They should have a handle on the current range although it seems that wild cat ranges can always be refined and they will definitely always need to be constantly upgraded. Although the range is still large it is about half what it was.

A wide range means a wide range of habitats which further translates to an adaptable wild cat and the leopard is certainly that. It can be seen in many different habitats. This is in part because of its bold and stealthy character.

The embedded map (second down) is a map showing places where vidoes have been made of the leopard hunting. To see them in their habitat please click on the red markers.

Here are some reserves within the leopard range where this cat lives. Reserves are pretty much where it will be found in Africa and India. 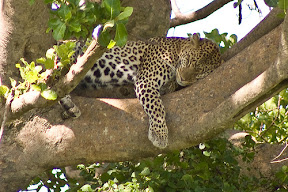 If by some chance you would like to use the above maps please give me a credit (Made by Michael @ www.pictures-of-cats.org). You can see the original map at this URL: Leopard Habitat 2009. Please click on the blue flags for videos that show the leopard habitat in the best way. In fact the videos are the only material available as almost all the still photos are of cats in captivity. A crude but effective test of modern distribution of this felid is the availability of videos in places other than Africa. There are some from India but not many. Turkey? No and I wouldn’t expect there to be any videos of leopards roaming around the Turkish countryside. It is listed by the Red List as being there. And Vietnam or China? No, nothing from those countries in the way of images either moving or still. I am not sure it occupies these countries anymore to be honest particularly when consideration is given to the way these countries treat domestic cats and the demand for wild cat body parts to supply chinese “medicine”.

As the videos attest, leopards usually live in forests near rivers, woodlands and grasslands. But as stated this wild cat is very adaptable to the extent that in the far east of Russia it inhabits temperate forests and temperatures in winter that can be as low as –25 °C. Here are some selected specific locations where there is believed to be leopard habitat: