Your search for a leopard picture is over. Here are some pictures by the very experienced and skilled professional wildlife photographer, John Devries and others. I am not sure where some of them were taken but I think they were all taken in Africa but the leopard range extends much more widely and into Asia. However, the pictures of the leopard and her cubs at water were taken in the Masai Mara in Africa. I have added some more pics at May 16th, 2022 as this page was first written in 2009.

The leopard is one of the four big cats. The others are the jaguar, the lion and the tiger. These cats can roar (Tiger Roar tells how it happens). 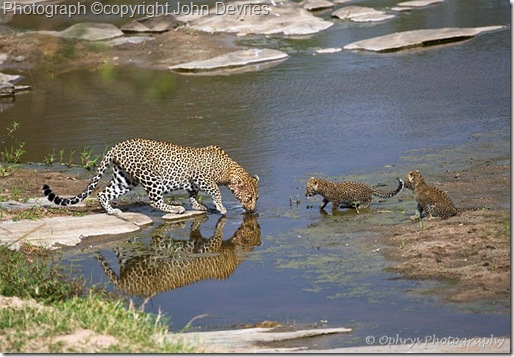 Photograph above ©copyright John Devries of Ophrys Photography. If you click on the image, you’ll see a slightly larger version.

My first impression when looking at these photographs is how wonderfully effective the leopard coat is as a camouflage. And this applies against a variety of backgrounds. It makes the leopard hard to see when still, and I am sure that capturing a leopard picture of quality is a real challenge.

The leopard is similar in appearance to the jaguar. Both have a stocky, solid appearance. The jaguar is normally little larger, however. Their markings are also similar. The spots are called rosettes. This is the same term to describe the spots on the domestic Bengal cat as well. You can see some Bengal cat rosettes on this page. As is the case for tiger stripes individual leopards can be identified by their coat patterns. The leopard’s spots are very well known (see the bible entry above – Jeremiah). The leopard still occupies Ethiopia I am pleased to report. 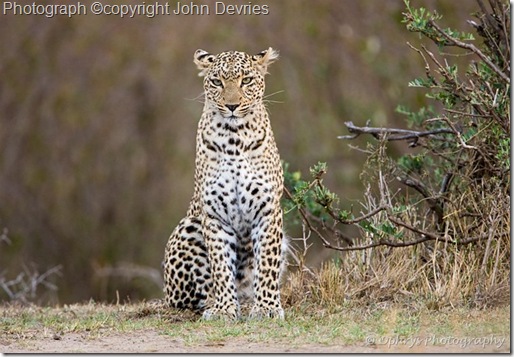 Photograph above is ©copyright John Devries. Another very fine leopard picture. John says the ears are pointing backwards picking up a sound and showing the markings on the ear flaps. A lot of wildcats have ocelli or a false eye on the ear flap as a form of visual communication. The leopard does not.

The leopard is the largest of the spotted cats of Asia and Africa. Below is range of weights of this wild cat which, although it is one of the so-called big cats, is considerably smaller than a tiger or lion:

By comparison the Bengal tiger weighs in the order of 220 kg or about 485 lbs. The average weight of a male human in the USA is 189.8 pounds (src: pediatrics.about.com). That puts the human male at about 1.6 times the weight of the average leopard. We shouldn’t be too frightened of the leopard.

Female leopards are about 40% lighter than males. Head to tip of tail is about a maximum of 2.4 metres or about 7 feet 10 inches. This is about 2 feet more than the height of a man. 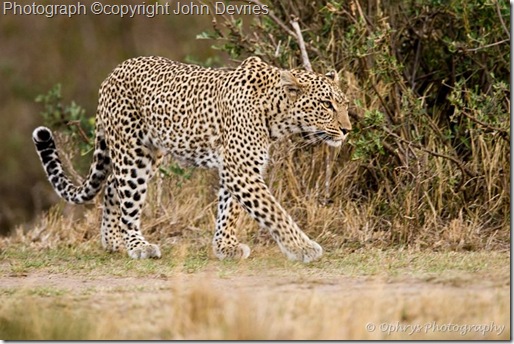 Leopards have a wide distribution on the planet and therefore inhabit differing landscapes. Forest leopards are generally smaller than those living in open land.

The background colour of the leopard varies from a near golden colour or what the Sunquists call “ochreous” or ocherous which means of the color of ochre (or orange-tawny)…..to, at the other end of the scale a greyish yellow or “olivaceous” (of or like the olive). 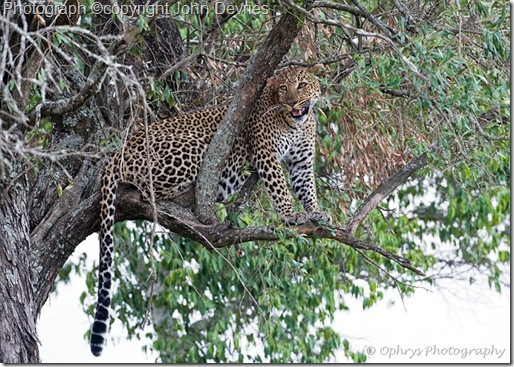 Photograph above ©copyright John Devries. Another very fine leopard picture showing how effective the coat is as camouflage and what agile and skilled climbers leopards are. The leopard is one a few wild cats that can descend a tree head first. [side note: my Norwegian Forest Cat mix could do that from 30 feet up!]

The background colour varies with the habitat (as does the size). Open plain leopards are more likely to be lighter and forest leopards darker.

The fur length and texture varies with distribution too as might be expected as the climatic conditions vary: 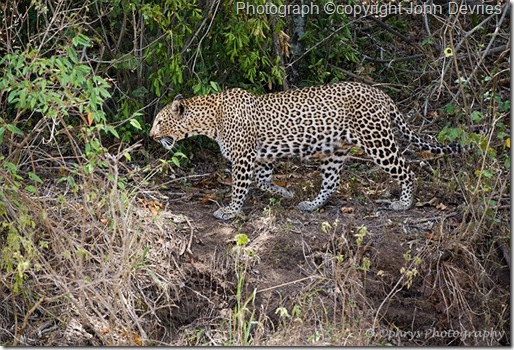 Leopard Picture – Sources: Wild Cats Of The World by the Sunquists a fantastic book.

Genuine jet-black panther in a video in a tiger reserve

People are fascinated with the black panther so when you have the opportunity to see a genuine jet-black panther crossing ...
Read More

The very unusual coat of this leopard has not been mentioned in the caption to the video in which it ...
Read More

Overview: Here are some facts about leopard cubs. A cub will normally be born as part of a litter of ...
Read More

Black leopard picture – where, what and how

People search for a 'black leopard picture'. Here are some good ones. Leopards can often have the appearance of being ...
Read More

Introduction This page has been refreshed at Dec 28, 2021. This is necessary in order to keep an eye on ...
Read More