This man, who I believe owns a private zoo and who is playing with his “friendly” and “tame” lion, suddenly finds out that he has riled his lion while playing with him causing the big cat to turn on him. The man arrogantly thinks he can subdue and dominant the cat which makes things worse. It gets quite panicky. The smiling woman who is with him senses real danger and runs away. Eventually the man is able to push the lion off but he was in real danger of being killed, it seems to me. The person filming the event temporarily points the camera in the wrong direction in fear of what has developed in front of them. 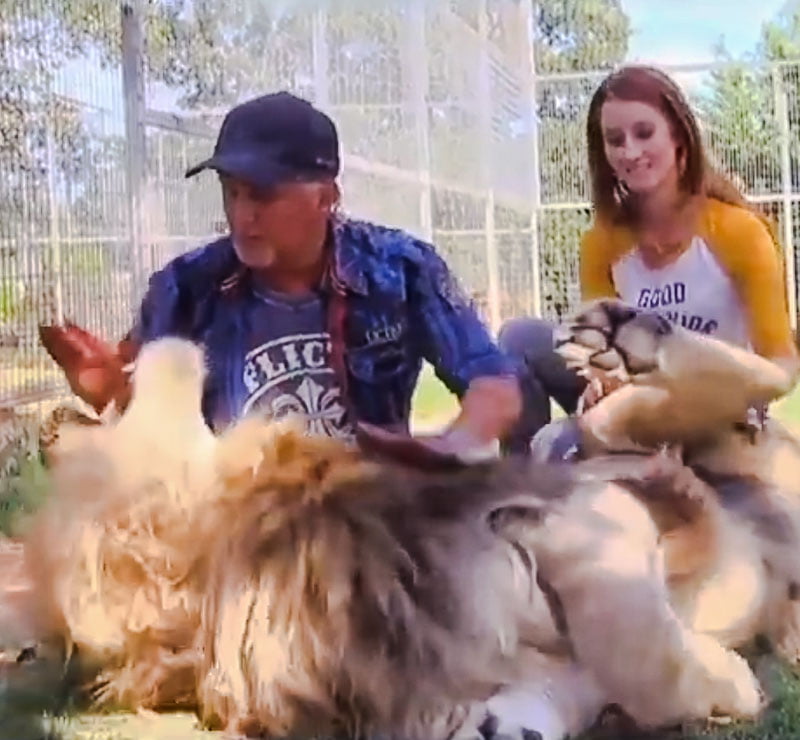 Captive lion is wound up by man playing with him and attacks. Screenshot. Sorry about the poor quality.

It is a classic case of playing with a cat too hard and what was a form of play is then perceived by the cat as something more aggressive which stimulates aggression in the cat which in turn becomes an attack. If that happens to a domestic cat then you can get away with it and it does, incidentally, happen between cat owners and cats all the time. But when it happens with a lion you risk your life.

YOU GOT TO UNDERSTAND THE LIONS ARE PREDATORS NOT A DOMESTIC CATS… EVEN DOMESTIC CATS SOMETIMES THEY TURN ON YOU.. IN NOT A VERY FRIENDLY WAY…😳😳😳 pic.twitter.com/4l1aaRTgJS

Please remember that these sorts of embedded videos sometimes stop working because of reasons beyond my control and if that has happened I apologise.

Over-playing with a cat of any size or species is unwise and the least. When you pet or play with a domestic cat you have to know what your cat likes and you have to do it in a limited way and sometimes it should be more gentle than you want it to be. You just have to make sure that you are within the bounds of what is considered reasonable by your cat not by your standards.

It is surprising that this man made a mistake. I think he was perhaps showing off to the video camera because he realised he was being filmed. Perhaps they were visiting and he wanted to present to his visitors how in control of his lion he was. And how his lion loved him.

He learned the lesson that you risk stimulating the inherent aggression in big cats if you roughhouse too much with them which can turn nasty as you see in the video.