Lion Food Chain – chart made by Michael @Pictures of Cats org using creative commons photographs from Flickr and Paint.net. If you would like to use this please contact me at mjbmeister[at]gmail.com. The food chain in this chart is a simplified one in respect of the wildebeest.

A food chain is the transference of energy from one organism or animal  to the next and so on to form a “chain”. Energy begins the food chain in the form of the sun. Some energy is lost at each stage of the chain. A straight line food chain is oversimplified in reality as it shows a single route of energy transfer when there is usually an interconnecting network because animals feed on a variety of animals as is the case for the lion.

A food chain starts with a primary producer and usually ends with the top carnivore. Primary producers are typically photosynthetic plants, which use sunlight as their energy source. They turn sunlight into food. So the chain most often starts with sunlight.

Herbivores belong to the second trophic level. A herbivore is an animal that eats plants. A tropic level is the position that an organism (an animal in this discussion) occupies in the food chain. Carnivores occupy the third level and the lion as we know is a carnivore.

Herbivores are vital to the lion as they are the link between the plants and and an acceptable meal. Herbivores consume the carbohydrates produced by plants using photosynthesis. Herbivores are the primary consumers in the lion food chain

The lion has a long list of animals that it considers prey from small animals such as the hare and antelope fawns weighing about 2 kilograms or less to young elephant weighing in at 1000 kilograms. Each prey animal presents a potentially different food chain.

The Asiatic lion in the Indian Gir Forest reserve mainly feeds on chittal deer (50 kilograms). In Lake Manyara National Park lions routinely kill large animals such as the Cape Buffalo (400-600 kg). For a full illustrated list of prey please see, What Do Lions Eat? The Cape buffalo is also a herbivore so the lion food chain in relation to this animal as prey would be the same as for the wildebeest. 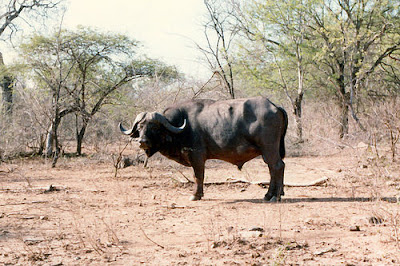 The chart above deals with a common prey, the wildebeest. All the photos were taken in the Serengeti National Park. You can see this marked on an interactive map of the Lion Range.