The lion of Judah tattoo is popular. It signifies all that the lion is. The most admirable qualities probably being this animal’s courage, strength and fearlessness. These are qualities that we, as humans, find very desirable, particularly if we are the male of the species! But in the modern world many women will also rightly find the tattoo appropriate to their character.

The lion of Judah has been a popular symbol for the Jewish people for centuries. Yet ironically the lion was exterminated in the geographic area that is called Palestine as long ago as the 16th century, about 500 years ago! Palestine is between the Mediterranean Sea and the Jordan River, and various adjoining lands and so includes Israel.

The Hebrew bible refers to the tribe of Judah; one of twelve Israelite tribes that formed a loose confederation. The period of history that we are talking about is over 1000 years before the birth of Jesus Christ. Bethlehem and Hebron were the main cities within the territory of the tribe of Judah. Bethlehem is a Palestinian city in the central West Bank.  The Church of the Nativity in Bethlehem is built over the cave that is said to be birthplace of Jesus of Nazareth. I have visited Bethelehem. It is a rather sad dusty place despite some efforts to smarten it up.

Lion of Judah and Judaism

The Book of Genesis is the first book of the Hebrew Bible and of the Old Testament – the Christian bible. Lion of Judah in Christianity

And in the New Testament Book of Revelation 5:5 the lion is also referred to (David is a descendant of Judah): The Lion of Judah represents Jesus in Christian tradition. Many Christian organizations and ministries use the lion of Judah as their emblem or their name.1

Ethiopia is linked to the lion of Judah. This is because it said that Jewish immigrants from the tribes of Dan and Judah entered the country and that Israelites returned with the Queen of Sheba from her visit to King Solomon in Jerusalem. It is said that Haile Selassie I, the king of Ethiopia from 1930 to 1974 was a direct descendant of the Israelite Tribe of Judah through the lineage of King David and Solomon. One of his many titles was, “Conquering Lion of the Tribe of Judah”. 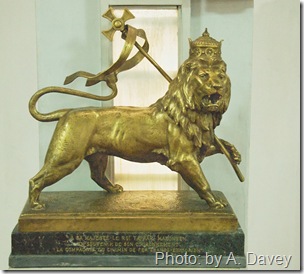 The above bronze was a gift to the Emperor of Ethiopia, Haile Selassie I.

As a result there are many pictures of the Lion of Judah in Ethiopia including on the national flag: 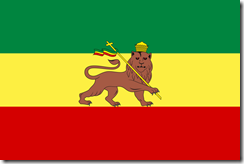 Having dealt with the background to the lion of Judah, here is an example of the Lion of Judah tattoo: 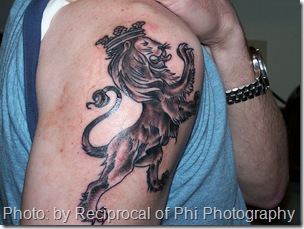 It would seem to be a tattoo that is particularly suitable to Jewish or Ethiopian people if they were considering a tattoo. Lion of Judah tattoos often incorporate the colours of the Ethiopian flag, green, yellow and red.

From Lion of Judah Tattoo to PoC Forum