Andy is said to be the domestic cat who fell the farthest in history and survived according to Desmond Morris in his book Cat World. There is no information about Andy on the internet, surprisingly. All I have is from Morris’s book. Andy fell from the 16th floor of an apartment building in Florida. He lived with Florida Senator Ken Myer.

Because I don’t have anything else on Andy this article might be the shortest on record 🙂 . So I’ll add a bit on falling cats…

First up: Dr Desmond Morris seems to be wrong in his assessment about Andy! The BBC on 25 March 2012 wrote about a cat whose name is Sugar who lived in Boston, USA. She fell 19 stories from a window and bruised her chest. Sugar’s owner was Brittney Kirk, a nurse who left a window open to let some air into the room. Fortuitously Sugar landed on a patch of grass and mulch which broke her fall. It appears that Kirk was unaware of the fall and may have been out of the apartment at the time so somebody else found Sugar. She was microchipped and was described as a “tough little kitty” by Ms Kirk”.

Cat falling legs fanned out. Note: Piper fell from a tree about 40 feet up onto grass and ran off. Picture in public domain.

In 1987 scientists conducted a study of 132 cats who had been brought to a New York City emergency animal hospital after falling from buildings. Ninety percent survived and were treated while surprisingly only 37% needed emergency treatment to keep them alive.

Perhaps the record goes to one of these cats studied in the survey. The cat fell 32 stories onto concrete and suffered a chipped tooth and a collapsed lung and was released after 48-hours. Remarkable.

Cat falling on all fours. Picture in public domain.

How cats do it

Perhaps you know how domestic cats are able to do this. They fan out their bodies like flying squirrels. This creates an airbrake and they reach a terminal velocity which is much lower than usual at about 60 mph (97 km/h). If a man jumped from a very tall buildikng they would reach a terminal velocity of 120 mph (193 km/h) according to this study conducted by Wayne Whitney and Cheryl Mehlhaff. 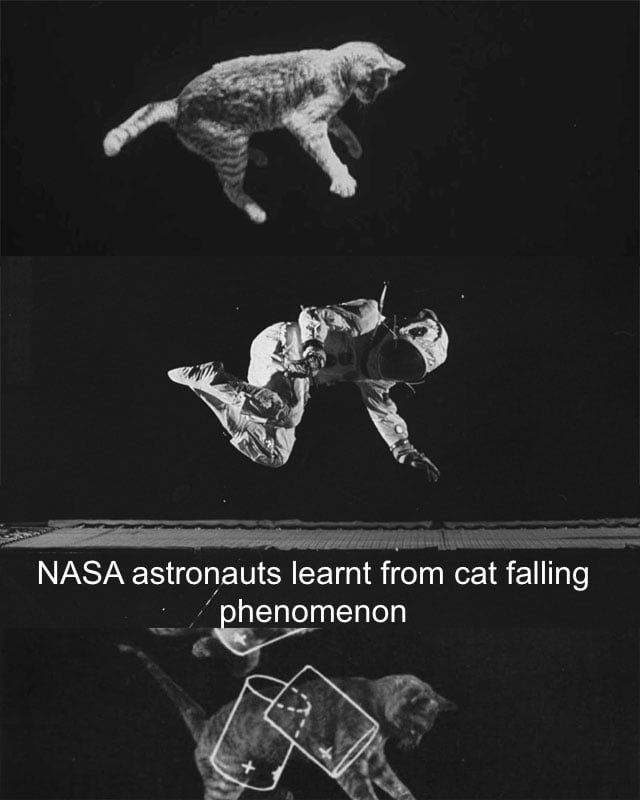 Clearly, cats developed this skill because they are animals that live in vertical spaces. They like to climb and many wild cat species often climbing trees and a few of them pretty well live in trees. You may have heard about their self-righting reflex as well. As soon as they fall they turn facing their legs downwards which, as mentioned, fan out.

To these attributes you can add the muscular anatomy of the domestic cat and their legs acting like shock absorbers. I discussed this in another post. Their legs are “angled” under the body rather than extended downward like humans or horses which also helps to create a shock absorbing effect. It all combines to give the remarkable domestic cat such a high level of survival on what looks like lethal falls.