Hurrah! This makes me smile inside. It is about time. The days of circus animals are fading away. On 25th April 2017, the LA city council voted unanimously to ban the exhibition of wild or exotic animals for entertainment (note that this is wider than for circuses) including circuses. The ban covers: wild animal shows, displays in public areas (sidewalks and parks), house parties and events.

The Bill was sponsored by Councilman David Ryu and National Council member Cheri Shankar. They were assisted by the Performing Animal Welfare Society.

Below are thumbnail images. If you click on them you are taken to a larger version. 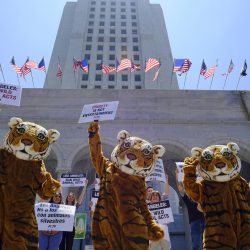 LA has followed other cities and jurisdictions in this commendable action: counties in Idaho, Massachusetts, New Jersey, and North Carolina and the city of San Francisco.

The public have shown a clear distaste for circuses using animals – a poll indicated that 69% are against. Circus attendances have dropped 30-50% over 20 years according to Forbes magazine.

It’s about time. It is an exploitation of animals. And it is cruel. The caging of the animals, training them, transporting them etc.. It is so unnatural and stressful. And there have been reports of animal abuse during training. There is also the danger posed to the trainers and human performers.

There is no doubt that there is a gradual change in attitude by the public to exploitation of animals for commercial gain and that includes using animals in the making of films, roadside exotic cat photo shoots and on television.

For me there is a new form of animal exploitation: celebrity internet cats. This is about exploiting the unusual appearance of cats due to various reasons including medical conditions. There are no bounds to how humans make money out of animals.

Los Angeles has banned declawing too.