I commented on a story here weeks ago, but why not write my own?! Luna came to live with us at Thanksgiving 2009. I was at my aunt's in the Albany area for the family get-together and she told me about a friend with 30 some kittens.

For weeks my husband and I had talked about adding to our little family, and so my aunt called her friend, Bonny. Bonny grabbed the three nearest kittens and brought them for us to meet.

Luna was silky, fluffy, and sweet. We liked her very much. (I would not have minded taking all three or more :p).

In the dim light that evening we thought that she was black. It wasn't until we saw her in the light at home that her unusual milk and dark chocolate coat was noticed. I was surprised because in all my years around cats I had never seen such a colour.

She was born last June, as I recall. Luna's mother was some sort of Siamese and her father was a big, black, longhair named Moonbeam.

Luna's coat intrigued me so much. She darkened with the weeks. For a long time she had a colourpoint thing happening. She was dark chocolate at the points and milk elsewhere. So pretty! After a while this evened out however.

There is a little patch of white hairs on her neck but too few to be noticed as a real spot. Not only was her colour strange and lovely, but her fur was silky. I never felt such a soft coat! It was oddly uniform, unlike the obvious two types of fur my other cats have, and so I assumed she only had a soft undercoat. Reading now I realise that it is the undercoat lacking, but her guard hairs are much finer than most other cats I have touched.

I decided not to spay her at this time wondering of the possibilities.

After a while I began to Google as best I could to find out about chocolate coloured cats. I posted a comment here, but mostly I found so little. Many sites copied the basic information from another, and it seems no one is breeding Yorks with an online presence?

I emailed many cat associations for information, and I have only two leads.

I had hoped to take Luna to a CFF show in Massachusetts last month. It was far away, and Luna was too old for the kitten division. Being un-spayed disqualifies her from entry now.

I do not know who to talk to about confirming my suspicions that Luna meets the breed standard. She certainly looks like the photos of Yorks and matches what I read. That she came from a farm is no different than the founders, and being from the Albany area also?!

Now I wonder how many of her siblings and cousins on the farm share her unique features?

It would be so nice if I could post more than one photo. This one I have is a bad shot, but at least you can see her lovely tail. Lately I have had a terrible time photographing her :p She moves around a lot and is so dark. My best photos are when she was a kitten probably.

Luna's fur was rather long when we took her home. After a while it became entirely short, but has steadily grown in. De-worming made a difference, I am sure.

It is still filling in, but it is so thick and plush! I cannot wait to see when she is fully grown 🙂

If anyone has any information I'd appreciate a comment! 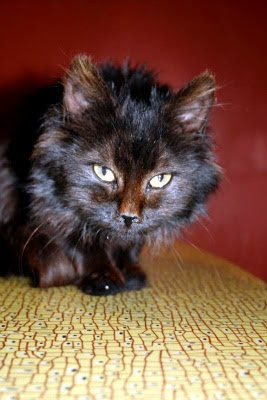 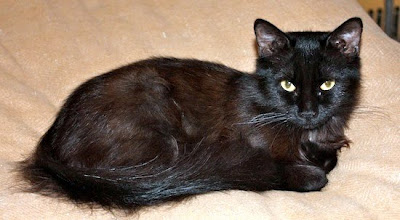 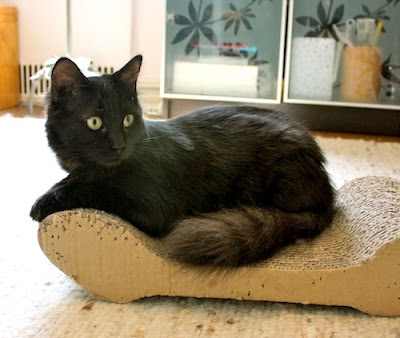