This is an article about the interaction between the lynx and humans at a conflict level. We know that every aspect of the lynx’s decline in numbers is due to our activities. This information comes primarily but not exclusively from a 9 year old document but is still very valid.

Do people have a negative view of the lynx? Certainly there is a long history of treating it as an animal to hunt in Canada, Eastern Europe and Russia. Where it is extinct (in some countries many decades or centuries ago) a major contributing factor has been hunting for commercial reasons (fur) or for pleasure (trophy).

It could be argued that in some quarters there is a negative attitude towards the lynx from hunter and farmers, while the general public care or know little about this cat. Hunters might dislike the lynx because its prey (small deer) is the kind of animal that hunters like to shoot. And the lynx is a very secretive, elusive and scarce animal so it is hard to hunt itself (there also limits on kills but these are based on inaccurate estimates of population size – see main article). Also hunters do not like the reintroduction of the lynx into areas where it has been extirpated because:

As for farmers it seems that they, largely, don’t perceive a social problem in the decline of the lynx or know of it and simply do what they have always done and kill the lynx if that is required to protect livestock but the lynx poses little threat to livestock.

Historically the decline of the lynx is seen to be due to:

Deliberate persecution by people of the lynx in Poland and Belarus (in the Bialowierza Forest) resulted in near extinction on two occasions, 1890-1914 and 1969-1970. The same still takes place today.

Currently, hunting in the Carpathian Mountains, which traverses several countries including Romania, Hungary, Slovakia and Ukraine is based on quotas that are decided by hunting clubs who have a natural interest in inflating population numbers to increase hunting quota. This is to the long term detriment of the lynx. The short term and long term mentality dilemma is one that faces people all the time on many levels. Conservationists think long term while hunters generally seek short term satisfaction. Shortermism is a modern day monster affecting all levels of conservation.

There is no reason for people to be violent towards lynx in defense of an attack by the lynx. Lynx do not attack people (e.g. see the videos below). There is no threat from the lynx, quite the opposite. There have been one or two occasions where lynx have “attacked” people but these have been accidents or due to rabid lynx. There may be anecdotal evidence of attacks by the other major predators in Europe, the bear and fox but I suspect these would rarely stand up to scrutiny.

As to livestock loss through attacks by the lynx, these are rare also. The lynx is not considered a major problem in this regard with the exception of Norway. In Norway apparently 8,000 sheep were killed by lynx in 1995. Often the total loss of sheep due to lynx attacks in a country average around 10-100, a much lower figure. I am sure that the Norwegian authorities have dealt with this (hunting of lynx is allowed in Norway) in a humane and sensible manner.

Most often the cause of sheep loss through predator attack is because the sheep are on unattended pasture because of the gradual decline in the need to attend due in turn to decline in predator numbers. Farmers had lost the habit of dealing with predators.

It isn’t all bad news, however between lynx and humans. In Finland, Sweden and Norway the lynx preys on reindeer, which is livestock. Kill numbers can be high:

However, in Sweden, for example, farmers receive payment for the confirmed presence of a lynx family on grazing land. I love that; a tangible and concrete positive attitude that shows how lynx and humans can live in harmony.

Lynx and humans interacting peacefully (I hope it continued that way when the camera stopped!): 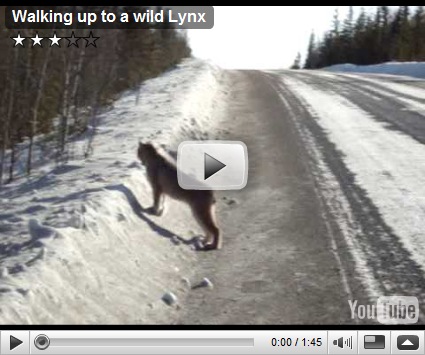 In the above video it shows how unthreatening the lynx is to humans. As an aside, traffic accidents are a measurable cause of deaths of lynx and is cited as a concern. I think this is an American lynx (Canadian lynx). 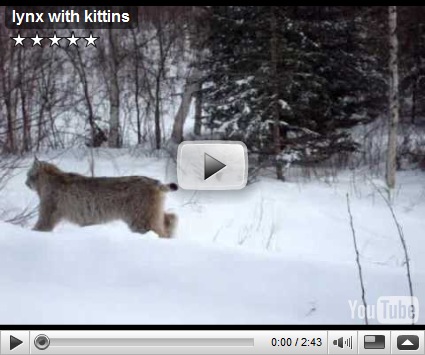 This was filmed in Canada, in which case the animal is a Canadian lynx. They are still hunted in Canada. Once again the lynx in on the road and looking very relaxed about human presence.

From Lynx and Humans to Eurasian lynx