↓
Home→Uncategorized→Lynx Was Used For Hunting

Lynx Was Used For Hunting

In times gone by the lynx was used for hunting as was the cheetah. In India at the time of the Maharajas both these beautiful wildcats were tamed and chained to assist their human masters on hunting trips (see cheetah facts).

This is a thumbnail of a painting by Marianne North of a street scene at a place called Alwar in Rajasthan in India. The time is 1878.

Marianne North’s notes on what she saw are interesting as they tell us how we related to wild animals in India over 100 years ago. There seemed to have been quite a good relationship although sadly marred by the ignorance of people at that time (and still is the case throughout large parts of the world) as to the needs of a wildcat. To chain them and coral them into small spaces was plain cruel.

She says that she saw a street full of cheetahs and lynxes. The painting shows exactly this. The lynxes she says were “restless” (probably trying to get free of the leash!). However, she correctly learnt that the lynx attacks its prey by either severing the spine at the nape of the neck (domestic cats do this and use their whiskers to find the exact spot – cat whiskers) or by strangulation in grasping the throat of the animal with their mouths.

She says that the lynx will jump at their victim’s throats. These are her words “I saw a whole street full of hunting cheetahs and lynxes. The latter are the most restless wild little animals, which jump at their victim’s throats like bull-dogs and strangled them. I saw a man put a piece of meat on the end of the bamboo cane and hold it up as high as he could, and one of the small animals (not much bigger than a cat) made a prodigious spring from the ground to the top of it, took the meat, and was down again in an instant. Their ears stick up right over their heads and meet at the top. The cheetahs are taken out in carts blindfolded and let out when within sight of the deer, when they creep up and spring upon them, holding them till hunter comes up and kills them. They are so intent on their work that they are easily blindfolded and led away again. All those wild beasts are chained to trestle-beds in front of the houses down the street, their keepers sitting or sleeping behind them, and little children, peacocks, cocks and hens, wandering among them without the slightest fear.” (this text is in the public domain due to passage of time as is the picture). You can see more cats in paintings on the cats in paintings page!

The technique of killing prey practiced by the lynx is explained by this enlightened warden. He explains that they have a technique to protect themselves from attack by placing their arms around their necks in a certain way that protects both the back of the neck and the throat. It is not surprising that the lynx was used for hunting. Here is the video: 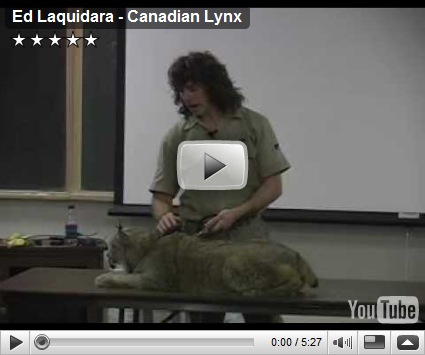