Indochinese tiger (why do I show this tiger? - see below please) - photo by guppiecat (Flickr) Creative Commons

You won’t find the Malayan tiger in the best book on wild cats, Wild Cats Of The World by the Sunquists because it didn’t exist when they wrote the book (it was published in 2002). This tiger subspecies with two scientific names: Panthera tigris jacksoni and Panthera tigris malayensis was carved out of what was the Indochinese tiger. A large chunk (600-800 cats) of the population of the Indochinese tiger (about 1,200 – 1,800 cats at 2004) has been classified as a new subspecies, the Malayan tiger.

It seems that the Malaysian authorities wanted the cat to be named after their country, thereby rejecting the name the international community gave the cat (after Mr Jackson). The Malayan tiger lives in southern and central areas of the Malayan peninsula (see map). 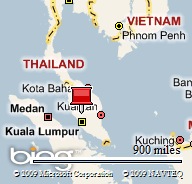 In the past it was all about how the animal looked (phenotypic – morphological - descriptions). DNA analysis and science has enabled people to see a difference where it was not once apparent. Is this a good thing?

To laypeople, pretty well all tigers look alike except interestingly the white tigers which are not classified as a separate subspecies. And the size of tigers varies. Those that live further south in the jungles are smaller. And one of these is the Malayan tiger.

So who reclassified the tiger? It is a team headed by Mr Luo (Mel Sunquist of Wild Cats Of The World, was on the team). There are six living (extant) subspecies of tiger they say. As three are extinct that makes 9 in total rather then the usual 8 and the extra tiger subspecies is the Malayan tiger. You can see the research papers here: