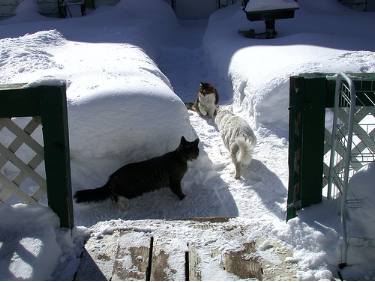 Male cat spraying is a very useful form of communication, both short and long term, for a cat.

There's lots of information on the internet about how to stop cats doing what, in fact, comes naturally to them, namely, spraying.

It is firstly useful to remind ourselves that neutering your cat will reduce spraying. Neutering should be a standard process.

It may also help to remind ourselves that urine spraying is a problem for humans but not for cats. A lot of sites talk about spraying as a problem. We need to understand our cat's behavior and work with it rather than against it.

We don't try and change out girlfriend's behavior and if we do we'll fail and lose her (and vica-versa). We accept the behavior of others provided it is reasonable.

To a cat, urine spraying is more than reasonable, it is an essential and highly useful form of non-vocal communication that we, as humans, can't match.

Of course urine spraying is communication through scent. Cats have great noses and use their sense of smell more than we do.

Spraying on a prominent object will leave a long term form of communication that both tells a cat that another cat is about and when he was about. In other words it provides a record (as good as a written record) of another cat's movements.

We are still not sure as to all the functions of leaving scent through spraying. But here are some:

Lets remind ourselves that we need not think of a cat's normal behavior as a problem or bad; just different (and sometimes better) than our behavior and we should try and fit in. For the wild cat spraying is a major part of their lives as part of scent marking in mapping out their home range.

Update: Male cat spraying or any cat spraying is usually triggered by territorial invasion. I took in my mother's three legged cat, Charlie and last night I saw him spray right in front of me onto a chair because a stray cat that I feed (Timmy) was on my bed. Charlie's space was invaded although he has only been with me for about 6 weeks. He is territorial. My girl cat is not bothered.

Spraying is usually triggered when there is a need to put down a marker that this is his/her territory. As mentioned, this is a very effective form of communication for cats as they have a great sense of smell.

The sequence of events is: approach spot, sniff it (maybe rub it with side of face), turn to place backside to object, raise tail, eye pupils dilate (apparently), arch back, tail tremor, spray horizontally, turn and sniff the sprayed area, move off.

More than 10% of adult cats spray regardless of castration etc.

Some animal behavioral "experts" advice giving drugs to stop spraying. One such drug is an anti-depressant called Clomipramine. This must be carefully administered. It has been found to be effective in a proportion of cats but I personally disapprove as it is simply quietening down the cat (removing the excitement that can be a spraying trigger). This then affects the entire character and behavior. Is that wise?