Well, yesterday, I spent the early hours of the morning, while the hot sun was coming up in a warm glow, with two gorgeous serval cats, Morpheus, a large male serval cat and his serval partner, Penelope.

The best light is at dawn or dusk. The light is softer and warmer. It is also lower in the sky. It grazes the ground creating texture.

I went to their enclosure at about 6 am; the sun was just at the horizon. 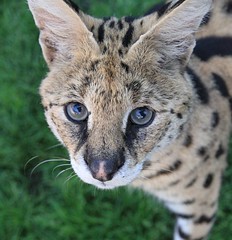 When I stood outside the enclosure about to go in they were both there just at the door looking a bit uncertain of my presence and certainly not showing signs of welcoming me in, which is to be expected.

I gingerly opened the door and slithered in as gently and unobtrusively as possible. They hissed at me.

The serval hisses quite a bit to strangers it seems. Sometimes the hiss can be a sign of excitement, I think, and sometimes it can change to an explosive hiss/shout, which means “clear off…” 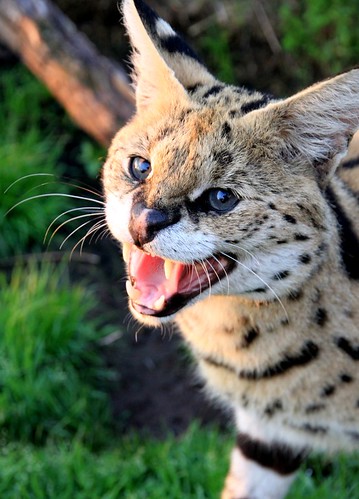 Serval Morpheus hissing at me

It looks like that all Morpheus did was hiss at me. That is not true. The best photographs are of him hissing! He often just ignored me.

The hiss might be accompanied by a flashing foreleg and claws out to give you a slap.

All that said, Morpheus and Penelope were civil enough to let me in and share their enclosure.

I had brought a cat tease with me and I settled down on a wooden table and waited to allow them acclimatise to me. I then approached Morpheus, a large male serval. He immediately sprayed me! I was too slow to get out of the way. As it happened, over the course of the 45 minute session in the enclosure, I was sprayed two more times and it was entirely normal for him and my fault.

I tried to get him to interact with me and so present poses and activity that was photogenic. I have to say that it is hard work and I found it a bit unnerving. After all, Morpheus is the size of a large dog. In fact on one occasion when I was using the tease he caught me on the finger with his claw and that hurt! My fault again for being too pushy.

Here is Morpheus hissing at me with real purpose: 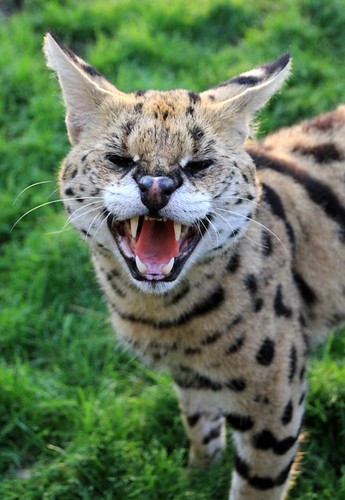 Serval Morpheus hissing at me, again!

One thing about wild cats is their speed. They attack a cat tease (a stick with feathers on) very quickly – it is a kind of strike and pounce. Servals in the wild listen for prey in the long grass with their large ears and then leap up and pounced on the prey hitting them with the paws of their forelegs. This is what they tend to do with a tease if it is near the ground.

Here is Morpheus stalking the cat tease with great intensity: 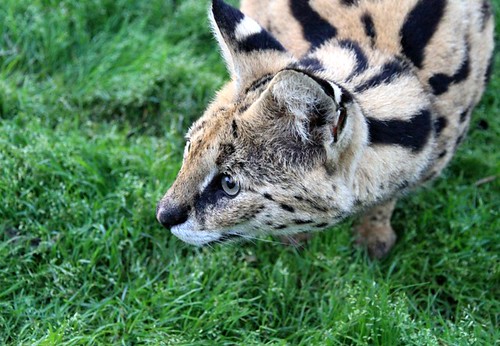 What about Penelope, his partner? Well she was pretty shy of me and less accepting of my presence. I have no argument with that and completely accept it. She did two things: ran away from me and when I got close she hissed at me:

Here she is hissing at me!… 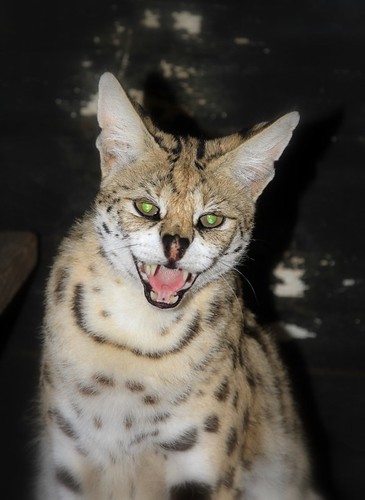 It is Serval Penelope’s turn to have her say

She did not spray me though! Penelope was a little smaller than Morpheus and quite a bit larger than Serena, who I photographed the day before.

I felt privileged to share their enclosure. They let me in and told me to respect their space. If I was not there to take photographs I would have been more respectful but you have to get close in photography. One last point – these photographs present fleeting moments, it all happens rapidly.

From Male Serval Morpheus and Partner Penelope to Serval cat