Margaret Atwood’s last two cats before a long intermission in cat ownership were Blackie who was a very big part of her family’s life including the life of her daughter and then Fluffy (who followed shortly after the death of Blackie (reports the Mail Online). Blackie developed kidney disease and was euthanised, as I understand it. Fluffy developed dementia and would roam around the house at night yowling which is not uncommon for cats confused by dementia. They are crying out for company and reassurance. After this long intermission, and abstinence from cat caregiving during which Margaret Atwood told herself that she would not have cats again because she was getting older and she might trip up on them when walking down the stairs, she decided to adopt two Siberian kittens. 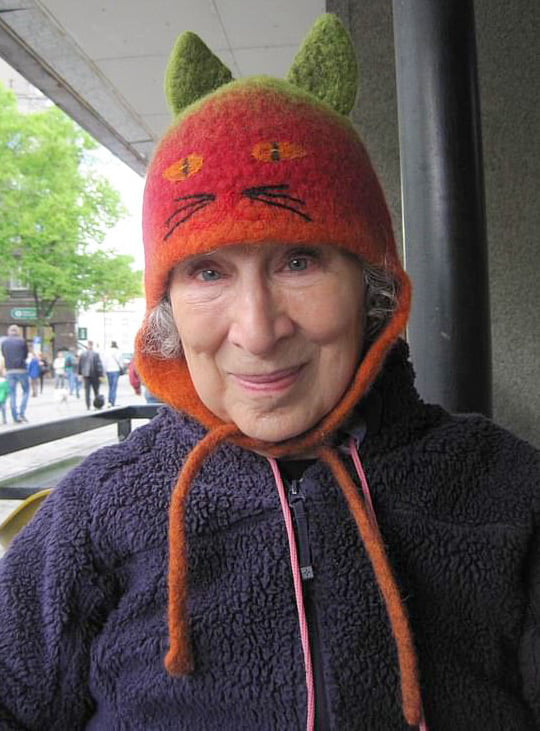 Author Margaret Atwood in Tallinn, Estonia, in June 2015. Her love of cats is evident with her cosy hat. Photo in the public domain.

She’s obviously done some work on hypoallergenic cats. There is quite a lot of info on the Internet about the Siberian cat being hypoallergenic. I think the claims are exaggerated. I did some work on this (click previous link). I think that you will find that they are not as hypoallergenic as you might think but then again, the term “hypoallergenic” is very elastic because it means that a cat so described has less of the allergen (Fel D1) which causes the allergic reaction in people. And therefore, there is less possibility that it will cause that reaction. It is not describing a black-and-white situation where a switch is thrown and the cat produces no allergic reaction whatsoever. It doesn’t work that way. In fact, some individual cats are hypoallergenic.

Margaret Atwood said that she has a slight allergy to cats and that the Siberian cat “is supposed to be low on the allergen scale”. I wish her luck. She should consider feeding her new kittens LiveClear, Purina’s new anti-allergen cat food. It has decent reviews. It binds the Fel D1 allergen and neutralises it. But vary the diet as this is a dry cat food as I understand it. Add in some good wet.

It is unusual it seems to me for Atwood to adopt a purebred cat. In her lifeit seems that she has always adopted moggies which is a derogative term really because they are random-bred cats of distinction. Random-bred cats are as good as if not better than purebred cats. It’s just that Margaret Atwood has to deal with this slight allergy. Unneutered males are the most likely to produce Fel D1. So maybe female Siberian cats are best?

She is going to keep them indoors and train them to walk on a leash. That is her intention which is a very modern way of being a cat caregiver. I certainly approve the method and she also says that she might construct a catio. This too, is a modern method of living with domestic cats. Good thinking, I would say. She is thinking both of her cat’s welfare and making efforts to protect wildlife. She’s done her homework.

She wants to build cat hammocks and have scratching posts. She said that “I will not allow myself to be distressed by shredded upholstery”. More great thinking! The best way to deal with cat scratching furniture is to protect the furniture with special double-sided sticky tape which you can buy on Amazon. After that you simply ignore the problem. And if you don’t apply this product to your furniture then, yes, you ignore the problem. Acceptance of a cat’s behaviour is far better than struggling to try and change it with various forms of negative reinforcement or divine intervention or punishment. If you adopt a cat, you accept the cat’s behaviour. That’s the formula and you are going to have to accept some disruption to the household and potentially some damage to possessions.

Atwood said that she is going to become like a witch with a couple of cat familiars. Brilliant. She loves cats and as a child she always wanted one but her parents refused her persistent requests because her father believed that cats should be working barn cats (old-style thinking but understandable) and they spent two-thirds of every year in the north woods of Canada. When they took the cat with them, he/she would run away and get lost and be eaten by wolves. The alternative was to leave the cat behind which was equally unsatisfactory.

Back in those days, there was no thought about keeping cats indoors or much less so for conservation issues. The Internet has changed all that with a lot of discussion about protecting birds primarily from domestic cat predation. I thoroughly agree with that but the problem has been exaggerated because domestic cats much prefer to prey on ground dwelling animals like mice and voles. They are easier to catch. Reptiles and insects are also more commonly eaten than birds for the same reason. There have been some exaggerated figures bandied around the Internet about the massive scale of bird lost due to domestic cat predation. I’ve banged on about this for ages because these are estimates extrapolated from small scale studies which is likely to produce inaccuracies. Let’s put it that way.

Atwood’s book: On Cats: An Anthology, introduced by Margaret Atwood, is published by Notting Hill Editions, available for £14.99.