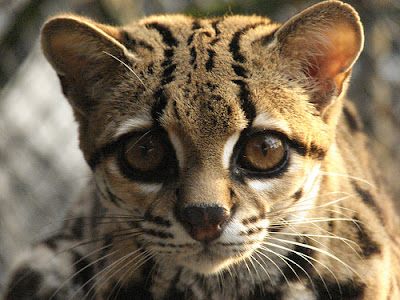 This page on margay cats is a continuation from the major page on this cat, which is here: Margay Range. The most important aspect of the wild cats is the continual impact human activity has on the range (distribution) of the wild cats. Habitat loss and fragmentation is probably the single biggest threat to the wild cats taken as a whole. The linked page above also discusses appearance and threats.

This page deals with the other interesting aspects of the life of this small and athletic wild cat.

Margay cats have long tails. Another name for this cat is “Tree Ocelot” (src: IUCN Red List of Threatened Species). Apparently it has also been called the “Long Tailed Spotted Cat”. Both these names tell us that this cat is arboreal, a tree dweller and being a cat that lives in trees it has to be a good climber and this cat is certainly that. The tail provides balance as is the case for the Clouded leopard another wild cat with great tree climbing and descending skills. The cat also looks very like an ocelot but is considerably smaller and has a longer tail although the markings are similar.

This cat lives in forests that are being cut down. However, they are adaptable and will use cultivated forest and disturbed forest as habitat. It seems that this cat is nocturnal. Is that the reason for the very large and effective eyes? A tracked margay in Belize was found to be most active between 1 am in the morning and 5 am. The margay cat is, then, a nocturnal and/or crepuscular cat (“nocturno-crepuscular”) although there are some records of daytime activity. In captivity their activity levels were similar to that of the cat observed in Belize. Sleeping and resting takes place in a safe place that has been observed to be at least 7 metres, 23 feet off the ground. This is a very good height.

Being tree and forest dwellers, they have evolved into being exceptionally acrobatic. Anatomically, there have been adaptations that allow margay cats to be this athletic. For example, their hind feet can rotate inwards, which provides the facility to grasp branches with greater effectiveness. The feet of margay cats are soft, large and designed once again for effective climbing.

It would seem that margay cats hunt both in the trees and on the ground (when moving from one hunting area to another). Wildlife experts assess the prey of wild cats by inspecting scats (faeces) and stomach contents (of dead – by natural causes or killed cats). This has indicated that margay cats hunt and eat the following prey: small rodents, birds, fruit (figs for example) and insects. Note: the distribution of this cat is very wide and the prey will tend to differ across the range.

Like many cat margays are solitary animals and live in low density populations (i.e. there are very few per square km). Home ranges (the area that an individual inhabits as his area of activity) are recorded as being in the region of 11 km² (Belize – young adult male) to about 16 km² (Brazil – adult male).

They can travel 6 km per day. This is a substantial distance for a cat the size of a domestic cat. As for the domestic cat and other wild cats, scent marking and scrapes are used to communicate occupancy of a home range to other cats with the aim of avoiding conflict.

A mating technique unique to margay cats is used when head shaking is accompanied by a moaning meow from the female and a bark by the male. I’d like to see that! The act of mating is typical of other felids – see cats mating for some detail. The oestrous cycle lasts for 32 – 36 days and the female is sexually receptive in this timeframe for 4 – 10 days.

The best way to set out the time table after a successful mating is in a table:

It is said that margay kittens develop quickly because of the need to accompany mother hunting in trees – a demanding occupation.

It is probable that one young is reared every two years, the same as for the ocelot.