Buddy, one of Martha’s rescue cats. He needed an operation for a cleft palate – a gap in the roof of his mouth. He is a great cat.

Dead feral cat. Richard was feeding a feral cat colony and saw her. He took her away in case she might poison the other cats. Very sad.

Feral cats who are part of a colony occupying an abandoned villa. They are feeding at dawn after Richard put down dried food.

8th October 2010 – Sliema, Malta: Some visitors might have seen the earlier posts about Martha’s heroic efforts to rescue cats in Malta. My favourite, though, is the story about her educating the children. That was an awesome event that I hope will save many cats from being abandoned or mistreated in the long term. It was the best kind of proactive cat care!

Please note: the photos on this page are thumbnails – please click on them for larger versions.

There are many beautiful cats in the world. For me, the most beautiful are the most vulnerable, the ones who are most in need of our love and care. 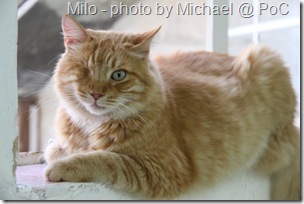 There is an inexhaustible supply of these beautiful cats. Take Milo for instance.

He was rescued by Martha after being tortured by people (they weren’t found). When he was picked up his right eye was out of its socket and sticks or something had been stuck into him – grizzly and ghastly but not untypical for a case of cat cruelty.

Milo has found his forever home and he is well loved. He is a large lovable boy and probably the alpha cat of the group he is lives with. You might have had the chance to see some other of Martha’s cats on this page: Martha’s cats.

While I was photographing 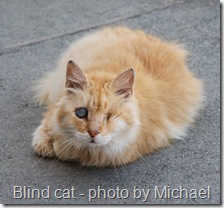 The cat is totally blind. Another case of irresponsible human behavior – sorry. Martha fed her neighbour’s cats because they were so skinny! If there is a cat or animal that requires help, Martha will respond to it, wherever and whatever it is.

I have also mentioned Martha’s partner, Richard in the first post on Martha’s rescue operation. He is an extremely practical person who works fast and efficiently. He has to. He works full-time as well!  In the picture below you can see him with concerned people, discussing the trapping of a feral kitten who was stuck on the fourth floor of a block of flats in construction. The people live opposite the construction site. A feral cat colony also lives around the building and Richard feeds these cats in preparation for trap, neuter, return. One of the feral cats is seen cautiously ambling by. This picture was taken at night, when the cats are about. 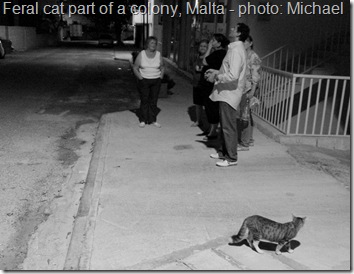 I have mentioned that Richard manages several feral cat colonies. One is conveniently close to his work place. The site is an abandoned villa with a nice overgrown garden – perfect for feral cats and with Richard nearby, it doesn’t get better for a feral cat! Here is a picture of one of them. He looks typically feral. He looks at me with great caution and concern; ready to fly off if he has to. The photograph was taken at about 6 in the morning so there was barely enough light to get this shot. 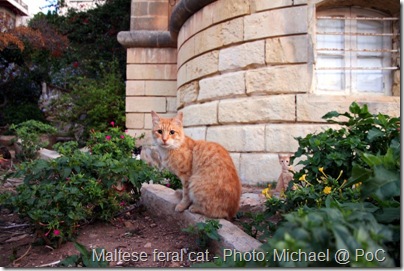 This is expensive work and Richard and Martha use a good percentage of their own money to fund Kitty Appeal. I hope some visitors can find it in their heart to give a little to Martha Kane’s Kitty Appeal rescue organization. If you can, simply visit her site and click on the PayPal button – thanks. Martha also has a Facebook page (new window) – please visit it for updates from her.