Update 25th April 2010: Good News…Great News…This law has been passed and signed off by Gov. Patrick. It is called “Logan’s Law”. The law bans devocalization, the practice of cutting vocal cords to stifle or remove an animal’s voice. The law apparently allows vocal cord surgery on dogs and cats to treat disease, injury or birth defects. This should be on very rare occasions. The law is named in memory of a show dog whose breeder had him devocalized and then didn’t want him when he stopped winning at shows. Callous and cruel behavior. There are at least a couple of similar cases mentioned in the video below.

What follows is the original posting…Yes, it is true, the Massachusetts Veterinary Medical Association (MVMA) opposes the Devocalization Bill proposed by the Honorable Senate and House of Representatives of the Commonwealth of Massachusetts. This is a repeat of the California Veterinary Medical Association’s opposing to the declawing of cats when 8 cities in California passed legislation to ban declawing. The vets really are two faced aren’t they?

It creates a criminal offense. Only a veterinarian licensed in the state can perform the devocalisation operation (implying that non professional people currently do it). A veterinarian who wishes to perform the operation must file a written certificate with

“the town clerk or in Boston, the police commissioner, stating that the surgical debarking or silencing is medically necessary to treat or relieve an illness, disease, or injury, or correct a congenital abnormality that is causing or will cause the dog or cat medical harm or pain.”

Pretty simple and utterly reasonable you would think. It is not an outright ban. The proposed legislation is simply overseeing the practice to ensure that the operation is for the benefit of the cat or dog.

The MVMA’s reasons to oppose it

More horrible weasel words. More self serving rubbish, I am afraid. These associations have totally lost their way in terms of morality and decent decision making.

First (as usual) they make the usual cliched sympathy statement just to try (desperately) to get us (the public) on their side – you failed I am afraid.

The Massachusetts Veterinary Medical Association, the statewide association of veterinarians, deplores devocalizing an animal to facilitate the animal?s sale or for reasons of convenience.

They then use the well worn “declawing cats route”. They say that there are times when a cat’s life can be saved by devocalising it!! True – a meow can be such a problem to a cat owner that is has to be relinquished and euthanised. Under these circumstances it must be an option they say and the decision should be made by a veterinarian in consultation with the client (the cat or dog owner). This is the blind leading the blind to a place called hell.

They oppose House No. 344 (the devocalisation bill) for the following reasons (recited verbatim for accuracy):

Well, it’s the same old rubbish, really. They don’t give the real reason which is that they see this bill as the thin end of the wedge. Although they say only a small number of veterinarians perform the operation, which is apparently tricky and often calls for follow up procedures and more pain and discomfort for the cat and dog, they are frightened that taking decision making away from them will lead to a ban on declawing and then what…

The truth is that they are unfit to make decisions on the welfare of cats because the criteria they use in decision making turns on…yes you guessed..money, their money, profit.

It has gone so horribly wrong somewhere.

Note: The MVMA has two staff, it seems to me: Assistant Director Marilyn Macleod and Associate Executive Director Dina Tedeschi. Their address is: 163 Lakeside Avenue, Marlborough, MA. This is a ground view of that address: 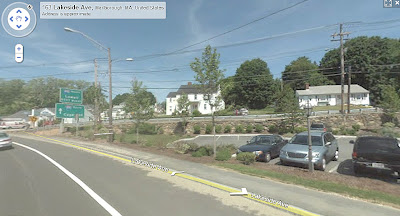 To the MVMA’s reasons to oppose it

More than 200 Massachusetts veterinarians took a compassionate and courageous stand by endorsing the bill banning devocalization of dogs and cats despite opposition from MVMA.

They’re the vets I’d bring my own pets to–I sure wouldn’t trust one who sanctions medically unnecessary surgery on a defenseless dog or cat!

BTW, every cat I’ve ever fostered or adopted had been declawed and then dumped. Likewise, nearly all the hundreds of devocalized dogs (and a few cats) in Massachusetts encountered by Coalition to Protect and Rescue Pets–the unfunded, all-volunteer group that sponsored this bill–had been abandoned AFTER having their vocal cords cut.

MVMA should start working to promote the latter rather than fighting to protect the former. That would serve animals and the profession far better than pandering to profit-driven breeders and lazy or selfish pet owners.