Nunu has lived with my friend Gigi for 9 years. She is Frank Sinatra’s big sister, and the first of Gigi’s four cats to come live with her. Nunu just showed up one day. She hung out under the parked car in Gigi’s driveway. Gigi said hello, but assumed such a beauty had a home and was just visiting. Gigi had at that time, three not so cat-friendly dogs, and there was no room for a cat, so she thought. 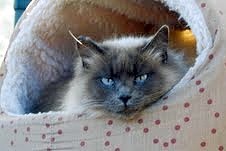 Nunu continued to hang around, and after a while Gigi noticed she seemed to be losing weight. Naturally, like any animal lover would do she started feeding Nunu. Grateful Nunu was never far from the driveway again. Gigi was worried though, because she knew her dogs were NOT going to ever welcome Nunu into their domain. So she thought.

Gigi tried to find the rightful owner, but alas – Nunu was just another castaway, abandoned to fend for her pretty self. After encouragement from friends, Gigi took Nunu to the vet for spay, shots and all the well cat work up. Nunu had to be kept still and quiet after her operation so Gigi set up the back bedroom suite for her, and smuggled her in past the dogs to her cozy recuperation quarters. Gigi took further precautions and set up a fence around the back of the house so there was no chance the dogs could get to Nunu. Three days past, and all was well.

By the fourth day, every time Gigi would pass by Nunu’s room, she?s see little paws coming under the door, grasping for anything. It was kind of amusing really, but Gigi knew that as long as Nunu was in the house she MUST stay locked in. After a few more hours, with the paws under the door came the talking. “Meow, meowwwww, let me outta here!” Gigi checked the barrier fence, and decided that Nunu would have to see for herself that it wasn’t safe out in the big world of the house. 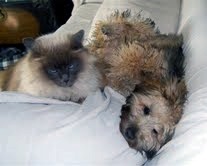 She opened the bedroom door, out pranced Nunu like a queen, head-butted Gigi’s legs, looked at the dogs on the other side of the barrier, lept over the fence, rolled over on her back…and to Gigi’s amazement (following a moment of horror) the dogs came over and gave Nunu a good sniffing all over, and that was that. Nunu has been the matriarch of the household ever since. She rules the other three cats, and now two different dogs. Her original brothers have all gone to their reward. She decides who sleeps where, and sometimes just chases everyone off the couch or bed so she can have it to herself. She’s quite the lady. And, she is beautiful.

From Meet Nunu to Home Page