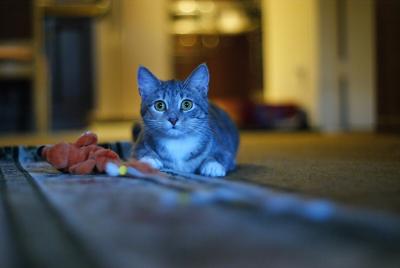 Ready to play with a toy

I'm a long-time, self-proclaimed 'dog guy' who took in my first stray cat, a very tiny kitten in my backyard mewing like crazy for its mother. It was palm-sized and very skinny, so I fed it some cat food borrowed from a neighbor, and over the days it got closer and closer to me, until I could reach out through the sliding door and pet it. It slept on my patio under covered deck, but wouldn't come in...and had definitely 'moved in' back there with regular food and water and shelter. Then on Christmas day, she disappeared. Gone. I called out for weeks, every day, but no sign.

I feared the worst, while telling myself the best, that she'd been adopted by someone else. 35 days later, on a cold night approaching freezing, I was headed to bed and passed the sliding door to see a skinny grey thing outside staring in at me. I couldn't believe it - so I opened the slider, and she just ran right into the house. I had no more cat food (thought she was gone!), and she was awfully skinny looking, so I opened a can of albacore tuna which she consumed entirely. From that day forward, she was an indoor cat. She started going into heat about a month later, and I had her fixed and got the shots and pills. She had tapeworm, which she needed pills for too.

It's been a year and a half now, she's happy as can be inside. Knowing nothing about cats, I've tried to look up what she is made up of (dogs are easier to tell what mixes are involved in a mutt!). She's got 4 white mittens, a general grey-and-white striping body, strongly raccoon-striped tail, beige and white unmarked belly hair, triangular upright ears, pink nose, 'M' mark above the eyes, very small and narrow head, and seems incredibly small for a 1 1/2 year old cat! She's also very vocal, almost all the time...she mumbles, groans, squeaks, clicks, mews, meows, and purrs. She's very active...running around kitten like all over the house, up on counters, into small holes, throwing toys high in the air, and loves hide-and-seek chases. And she loves to sleep right against my side on the couch or bed.

I've got a lot of shots of her I've taken over the past year and a half...from first-discovered kitten to current day...I've uploaded one here, but would be glad to share more. If anyone can give me any idea of what possible breeds she could be mixed from, or why she seems to be staying quite small, I'd appreciate it!