Milk thistle for cats is a extension to giving it to people, it seems. What is milk thistle?

We have probably all seen it by the side of the road or some such place. 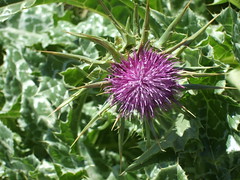 It is a very common flowering plant of the daisy family (Asteraceae). It is a thistle and the leaves have a milky sap. Herbalists have been using the seeds of milk thistle for thousands of years, it is said, to treat liver disease and protect the liver1. For humans, milk thistle is also used to counteract the harmful effects of alcohol on the liver2. It is a natural herb and widely available to purchase as an over the counter medicine for people. It is promoted as a natural liver tonic and an anti-oxidant to prevent liver disease. It is claimed,“to help detox and regenerate your liver"..”

The active ingredient of milk thistle seed extract is a compound called “silymarin”.

So for humans, milk thistle has beneficial effects on the health of the liver. How does this translate to cats?

I cannot find anything on milk thistle for cats in the well regarded books that I have on cat health. For instance there appears to be no mention of it in the best book on cat health problems: Cat Owner’s Home Veterinary Handbook by Drs Carlson and Giffin. It is not mentioned in a book on Natural Cat Care by Dr Bruce Fogle that focuses on the sort of treatments that would include milk thistle. Medicines for people are sometimes prescribed for cats in appropriate doses (except pain killers please note), but many treatments are unsuitable.

Research on milk thistle for pets appears to have focused on dogs. It is claimed to help resolve these conditions:

Fatty liver, Chronic hepatitis, inflammation of the bile ducts and surrounding tissue, prevention of gallstones, inflammatory bowel disease (IBD), triaditis, to promote healing after drug therapy and/or vaccinations, cancer,  hepatomegaly (enlarged liver), as an addition to treating with medicine in protozoal infections (infections caused by single celled creatures known as protozoa), poisoning from insecticides, pesticides, mushrooms and some drugs3. I sense that as there is not a lot of hard science, the true benefits may be less than is stated.

Some drug treatments can adversely affect a cat’s liver when recommended doses are exceeded. Example are: antibiotics, diuretics and Tylenol4. Bearing in mind that milk thistle has a track record for being a curative for human liver problems and that it is claimed to help prevent poisoning from drugs it may be that a holistic vet will prescribe it when treating with some conventional drugs.

It can be bought online where it is said to be a “natural treatment for liver disease in cats”. It is claimed to combat toxins and repair the liver with not side effects. An example is NHV Milk Thistle at PetWellbeing.com

Please don’t prescribe milk thistle for cats without consulting with a veterinarian first.