I live in West Allis, Wisconsin. There is a feral cat problem in my neighborhood. It was brought to my attention that there were kittens living under my front porch, but I'd never seen them so I didn't believe it.

Animal Control had been notified by a neighbor. My sister did see three baby kittens eating a dead bird in front of our house one evening. Traps were set and many of the kittens were caught. According to Animal Control the animals are held for seven days at Animal Control, are given their shots, and if able to be adopted are sent from there to the humane society for adoption.

One morning I was out handing out the block watch newsletters (I'm the block head for my neighborhood) when I looked across the street and saw a small black cat leading two small black kittens. They all sat for awhile by the vacant house next to mine. There really were kittens! The mom went across the street with one of the kittens, but the other kitten didn't see her go and he was meowing piteously looking around for her. I dropped my newsletters and ran, chasing him around the house. I knew I was going to get him because he'd get himself cornered by the back steps, and he did. He was tiny and so wild-- hissing at me and trying to bite and scratch, but he couldn't do anything, he was so small.

As I took him into my house I promised him things would be better for him and someday he'd be glad I'd caught him. I wanted him to be able to be someone's pet. That's what he was born for. He shouldn't have to live wild on the streets, eating dead birds and drinking from puddles on people's driveways and never knowing what it is to sit on someone's lap and purr. (People sometimes romanticize the life of a stray cat, but it's short, difficult and dangerous.)

My husband initially said no to keeping the kitten, so I turned him over to Animal Control. They were able to get him to eat, which I could not do. (The secret is mother's milk replacement and really stinky cat food.) They began the process of socializing him. They told me that I had seven days during which he could only be adopted by me or someone I would choose. After that he'd go on to the humane society, where he would have a good chance of being adopted, since he was a really cute kitten.

My husband changed his mind when he saw how important it was to me to have that kitten and keep my promise. I also told him that as a kid we got all our cats by catching kittens on Grandma's farm, and there was just something wrong in the universe if I couldn't keep the kitten I'd caught. If you catch the kitten, you get to keep it.....! 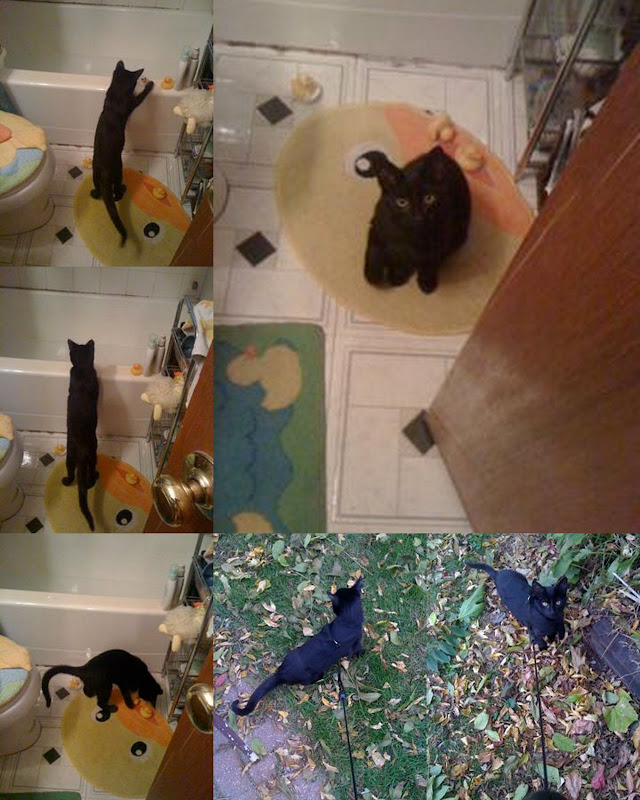 I was getting ready to go over to church and rehearse my choir when I heard a splash in the bathtub which was draining. There was Monty pushing rubber ducks in, so I got some photos of him doing it. The other pictures are of Monty in his new harness. I just took them a few minutes ago. When I got home from work he was begging to go out even though it's cold and wet out there.

.....I was able to get my little black kitten before he left Animal Control. For the $75 adoption fee he got his first distemper shot and deworming. He also had a cold, which he may have caught at the pound or had when he came in, and I got the medicine for that with excellent training in how to administer it. They told me to bring him back in a month for neutering. (I'd thought I'd caught a boy kittie and they confirmed that for me. My friend Wendy has a cat name Tommy gotten under similar circumstances. When she brought Tommy to her vet to be neutered she was informed that that particular cat would actually need to be spayed.)

I didn't know what to call my new friend. I could only think of Snowball, which would be funny since he is all black. My sister came to the rescue saying, "Why don't you call him Monty?" Monty looks like a little panther with the roundest eyes you ever saw.

I didn't cry when I initially dropped Monty off at the pound, but I cried the day I picked him up. I haven't had a kitten in over twenty years, and I didn't know how much I'd missed having a cat until I went to get Monty. The last cat I had became my mother's when I went off to college. She looked a lot like Monty except she had white feet. We named her Mittens, but she acquired the nickname of Muttonhead. I sometimes call Monty Muttonhead, somehow forgetting he isn't Mittens.

He is a little different-- he's not the jumper Muttonhead was, but he will retrieve a toy and bring it back so you can throw it again. He also is quite fearless about water, wanting to stick a paw into my bathwater and not minding getting splashed. That's not as weird as it sounds -- Animal Control told me that when he had that upper respiratory infection I should bring him in the bathroom with me when I would bathe or shower because the warm steamy air would be good for him. Now he thinks he has to be in the bathroom with me, and it does give us a little extra time together in the mornings when I have to work all day.

Monty seems very content living with us. He eats like a little horse. He's always amazed that there is fresh food and water for him all the time. He seems to know he has hit the jackpot in life. He purrs immediately for anyone who even comes near him. He seems to expect that everyone will love him and pet him. He is quite rambunctious and I have to remind my husband that kittens are like that and Monty will calm down as he gets older.

I read up on declawing and talked my husband out of having it done on Monty. As a Physical Therapist Assistant it's easy for me to understand how declawing could cause gait abnormalities, arthritis and other problems for the cat (not to mention long term phantom pain) and I explained all this to my husband. Also, Monty is such a wonderful cat now, it would be a shame to see his personality change after declawing, and putting him through such torture would not be in keeping with the promise I made to him upon catching him that cloudy Summer morning.

I look out my window at the house next door where I caught Monty and I'm just amazed that my life could change so much in a moment. I told Monty the other day that someone up there really loves him, because his life could have been a lot different. My life is better with him here too.

An old friend recently told me that he believes God not only walks with us in life, but that He walks ahead of us also, preparing the way for us. Catching Monty was like that-- a miracle prepared ahead of time, the timing just right. I feel for all the stray cats that struggle to survive, but I'm glad I could help one.

I also want to commend the workers at Animal Control who do a very difficult job. The vet tech there did a better job explaining how to administer medication than Monty's current vet has done. Animal Control did a lot for Monty for a very reasonable price and gave me good advice on how to care for him. The people working there were ecstatic to see a happy ending for Monty, and they genuinely want that for all the animals they care for.

From Monty to Feral Cats