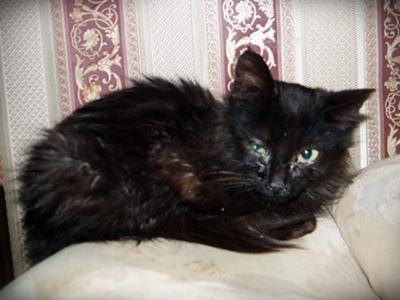 Casper had a URI

Casper after 5 days of treatment

Good morning readers. I received information on a few research projects the Morris Animal Foundation is conducting and wanted to share it with the readers at pictures-of-cats.org. You're going to need your brains turned on for this article as there's a lot to "digest." This wonderful organization was founded in 1948 and funds 300 research projects each year worldwide.

Here are a few I'm very interested in because I deal with it with almost every rescue. I'm for anything that involves reducing the rate of illness in shelter cats.

The first research project I'd like to discuss is taking place at the University of California-Davis (UC-Davis). I don't know if the readers are aware of it, but Davis ranks at the top in the U.S. with innovative ways to treat cat illnesses. I have another article in the works about their veterinary program. Colorado State University also has a study worth discussing and is also funded by Morris.

The first study at UC-Davis is called D09FE-507 and is being led by Dr. Kate F. Hurley. You can try searching for this using "Environmental and Group Health Risk Factors for Feline Respiratory Disease in Animal Shelters D08FE-057, Kate F. Hurley" as a search phrase. Just copy and paste that into the Google search panel.

I'm very interested in this study as it's conducting an experiment on two types of cages and the percentage of shelter cats who develop upper respiratory infections (URI). I'm interested because several of the cats I've rescued have had this. Even the cats who were declared healthy on their paperwork. I've also watched the euthanasia list and found cats who were listed healthy on one day are listed as sick a few days later.

Studies show that housing cats singly for the first few days for evaluation can cut down on the number of sick cats. Stress plays a big part in which animals will get sick awaiting rescue or adoption. Comfortable housing for a new arrival can dramatically reduce the amount of sick cats.

The shelter I rescue from has a humane society next door. A cat's life may depend on it's health when the society visits the receiving area of the shelter because the society doesn't want to put a sick cat on the adoption floor. Many cats are euthanised for illnesses that can be treated and cured at home. The problem is these cats don't have the time to get well at a shelter.

One of the newly designed cages offers a hiding place for the cat. This is important because with all of the noise, including barking dogs, and strange smells, it's likely a cat will become stressed out. Even the task of having the cage cleaned by a shelter worker is stressful. The new cage will lessen stress on a shelter cat.

I wish I had a photo of the new cage design being tested. I picture it as having a compartment large enough for a large cat to fit into to hide. This would ensure a "safe place" for the cat to stay while the cage is being cleaned.

I've rescued 13 cats now. I can assure everyone that they all had an "under the bed" recovery period except for the kittens. The adults hid anywhere from a few days to a few weeks. So I know cats want privacy when they're afraid.

Let's move on to the next study funded by the Morris Animal Foundation. The following study is being done at Colorado State University where studies are being done on URI's (Upper Respiratory Infections). Feline herpesvirus 1 and feline calicivirus are the main causes of shelter URI illness (feline viruses). A study being conducted by Dr. Michael R. Lappin, Colorado State University deals with cases that are not responding well to traditional treatment. If successful, study D10FE-518 may change the way URI's are treated in shelter cats. Co-sponsor: Neil and Sylvia Van Sloun, The Van Sloun Foundation

Next I'd like to explain a little about a program involving 15 shelters and being followed by UC-Davis. Fellow: Dr. Aki Tanaka; Mentor: Dr. Niels C. Pedersen, University of California-Davis is conducting an experiment by compiling the URI rate from 15 different shelters. The shelters enter all data in a central database and newsletters go out keeping everyone in the loop of how well things are going. This case is Study ID: D06FE-404.

It's predicted that 30% of income of some of the shelters nationally go into the treatment or euthanasia of cats with URI's. This frees up money to be used in better ways to serve the cats. Plus more cats can be put up for adoption/rescue with the knowledge the cat is in better health. Many of the 15 shelters involved in this study report percentage rates close to 0% of URI.

I urge everyone to study these cases on their own as there is simply too much info for me to condense it into a short article.

Readers, support the Morris Foundation if you can. Their research is making life better for cats and that's what we all want.

My goal here is for shelters to keep an eye on the outcome of these experiments. Take that knowledge into local shelters and evaluate whether everything possible is being done to prevent the spread of disease.

Readers, I ask you to follow the guidelines of your personal vet as to which inoculations your cat should have. They help protect your cat, but are not 100% effective because of the number of URI's out there.

That's it for this article. Hope I didn't give everyone a bad headache with all the information I've thrown your way.

Shelter cats are dear to my heart and I want to do everything I can to help them.