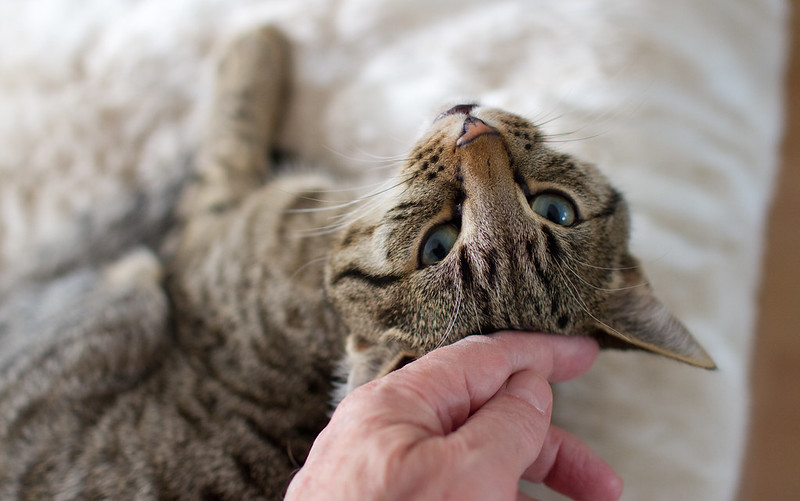 John Bradshaw in his book The Feline Enigma Revealed believes or speculates that although we decide where to stroke our cat based upon our experiences and what we know are their preferences, most cats:

“…indicate precisely where they wish to be stroked by offering that part of the body, or by shifting their position to place it under the owner’s stroking hand”.

I am not sure I have experienced this or noticed it to be honest. It had never occurred to me. Perhaps it is another example of cats subtly training us.

He goes on to say that some scientists have speculated that our cat companions are deliberately inviting their human guardians to take up their scent. For example, cats prefer to be stroked around their cheeks and ears because these are the areas where there are skin glands which emit “perfumes” which are appealing to other cats. The cat wants his/her guardian to take on the smell emitted by these glands.

Extending this idea further, cats don’t like us to touch certain areas where there are glands which emit scents that the cat does not want to place upon us. An example of such an area would be the base of the tail where the supra caudal gland is located.

The scents emitted by a cat’s glands are virtually undetectable by us. They are bound to be transferred to our hand when we stroke our cat.

Bradshaw also says that this transfer of scent may not have much social significance for our cats. He makes this deduction because cats would be constantly sniffing our hands if there was some sort of social significance about the transference of scent. Cats do sometimes sniff our hands, however. The main function for stroking from the cat’s perspective is that it feels nice (“it’s tactile component”). Touch is very important to the domestic cat. Also it seems that cats derive pleasure and reassurance if we smell of their perfumes. Bradshaw does not mention this but there is also an element of ‘scent exchange’ – our scent is deposited on our cat. Cats like either lick it off or lick it to taste it.

Stroking our cat is a substitute, from the cat’s perspective, for what scientists call “allogrooming” – the mutual grooming between cat associates (friends). For us it is pleasurable. Studies show that only 10% (1 in 10) of cats like to be stroked on the belly or around the tail. Most cats prefer to be stroked on their heads rather any other part of their body. My cat has a distinct preference for the forehead and crown of the head and then leading to the back of the neck.

Cats “regularly invite their owners to stroke them”. They do this by, for example, rolling over in front of the human caretaker or just presenting themselves in front of us when we are at the computer (as Gabriel just did a minute ago). This is also I believe a submissive act recognizing the human’s dominance in the relationship.

Not all cats want to be stroked. Guardians need to understand that and I believe most do through experience.

Sources: (a) Cat Sense: The Feline Enigma Revealed by John Bradshaw (ISBN: 9781846145940) and (b) Michael. The picture is of Gabriel. I took it to illustrate the article. It was one take. There is love in his eyes, I believe.