Furby being a good little man

Furby's photo shoot was so easy and turned out so well that I wanted to pass along a few tips on how I accomplished it. It was really easy and something you can all copy at home. Those of you in the UK might like to try it for the next Mother's Day. This setup is also good to make a template for birthday or all occasion cards.

My first tip is the lighting. We have these new energy saving bulbs that are swirly shaped and put out a lot of light. I used 4 60 watt bulbs in my ceiling fan light. That made a major difference in the quality.

For props I used the marble table. Any small table will work. I'm fortunate I had the marble topped one, which I never used at all until now. I put it out 2 days before I began the picture session. If you have a small table that is scratched up, cover it with whatever you like. Furby has several colors in his coat, including silver, white and brown, so I used solid colors. You don't want to overwhelm the photo with a bunch of patterns. If your cat is one color, feel free to try different patterns. My Furby looks best on solid colors. On earlier pictures of Furby I corrected the brown in his coat. Now I just leave it because it's what he is. He has brown under his neck and on his back.

I did the ones on white on my couch. But Furby now prefers the marble table so I'm sticking with it. The backgrounds used are lace curtains tacked to the wall. That was it. Nothing expensive.

I bought the flowers at Wal-Mart. The rose was $2 and the daisies were $3. I got a lot of poses with him asleep because that was the easiest way to get started. So every time he tried to take a nap, he woke up to a camera flash. No wonder he gave me dirty looks. 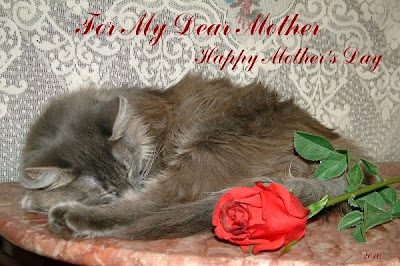 Then I just watched him throughout the day with the camera by my side. There were several times he was ready to play. Unfortunately it was with the rose. My best technique using the rose was to lay it beside him while he slept and be ready to take the picture when he first opened his eyes. I had to use several different objects to keep his attention. I used everything from keys to clicking my fingernails.

I was at a distance of about 6 feet when I did the shoot. I had the lens zoomed more wide angle than usual because I didn't want to risk cutting off his head or his tail because I was also the entertainment committee and kept having to jump backward to get the shot. I cropped on the camera before transferring to the computer.

I used natural light for some, but wouldn't recommend it. I took several beautiful poses that weren't up to par because they were slightly blurred. I'll be adding those to his Facebook fan page and his site at: Furby the Feral Feline.

Also some came out with uneven lighting. The photo at the top of this story is an example. It was made using the flash and would have been perfect except for one mistake. I had my front door open and the picture was lighter on his face. It's still a good picture of him. So use the flash in a very well lit room. I believe that is the secret in preventing red/green/gold eye. PLENTY of light. And even lighting.

I took over 50 pictures to get 15 good ones. This is normal. Maybe even above average. Make sure you're using a digital camera. Film is just too frustrating for this kind of photography.

I unscrew all of the bulbs except one when not taking pictures. My living room is too bright to leave them on.

I used PhotoScape for editing. I play with the "bright" controls a lot. Most of my editing is done at night because I have more realistic lighting on my computer screen. I find when I edit during the daytime I tend to overexpose the final picture since light is coming in my living room window over my shoulder.

My final step is a program called Paint.NET. It's free and I use the Handscript lettering. For the Mother's Day cards I did the script in 2 parts. Once I completed the top half of the card I would save it and then reopen it. That way if I made a mistake, I only had half to do over.

I realize there are fancier programs out there, but I feel like an idiot trying to use them. And I have a degree in photography! Plus being unemployed I have to be thrifty. PhotoScape and Paint.net are both free and easy to learn. Picasa is a good freebie also.

I hope this helps and inspires you.