Chingo stealing turkey for his friends...

I bought my Savannah about 6 years ago. His name is Chingo. He is an F4. He is a head butter. He loves to play constantly and he is extremely vocal. He ADORES my dogs!! He also has 4 other cat playmates. We is a complete joy! 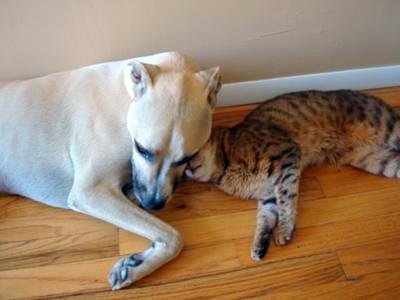 I love you!! - Chingo and Jake
Photo by Christine Wilson

Here is Chingo again. Chingo is 6 and Jake is 5 years old. From the day I brought Jake home at the age of 4 weeks old I couldn't separate the two of them. Jake and Chingo adore, respect and love eachother like no other. Jake does whatever Chingo wants to do and allows Chingo to do whatever he wants to him too!!! I plan on getting an F1 in a few years. 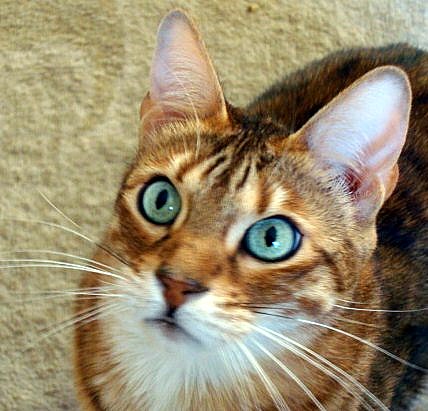 Hi Christine... Despite being a very short original post, the picture stopped me in my tracks so I published it! It is a great picture that shows the athleticism and sort of alpha type behaviour or lets say fearless get up and go behavior of the Savannah cat.

And it is interesting (and useful) that he likes dogs. I guess he must have been raised around dogs.

Your picture brings to my mind a similar picture by Kathrin Stucki (A1 Savannahs, Ponca City, Oklahoma) of Magic, the F1 Savannah cat featured in this video: Savannah Cat Action

. The video also contains two great examples of Savannah cat head butting and it is of a different level to your average moggie as you know. You may remember the picture. Here it is: 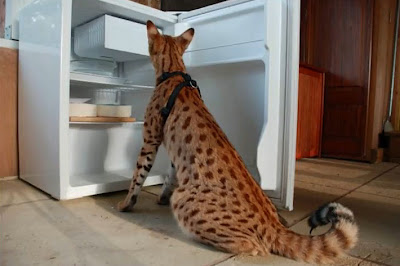