Maine Coon Tootsie - she is polydactyl - photo by valleygirl_tka (Flickr)

Hi, I'm Valley Girl and I have a blog that is part of PoC - it is a subdomain of PoC in fact. You can see it here: TEH KITTEH ANTIDOTE/ANECDOTE. I'd like to say a few words about declawing cats if I may.

The essential message is, of course, if you want a cat, a cat comes with claws - a straightforward, obvious and commonsense approach. Here are my further thoughts...

It's really amazing to me that some cat owners who really do love their cats, and wouldn't ever think about having them declawed don't even do the obvious things- like providing an alternative for the kitty to claw, apart from rugs and furniture. What is so hard about buying a scratchy or a cat tower surrounded by rug? (I have some personal tales of visiting friends, buying the kitty a scratchy, and voila! but these stories are too long to go into right now.)

Even cats that are indoor/ outdoor cats won't restrict their clawing activities to outdoors. Why should they? Indoors is part of their home territory, just as much as outdoors is. Cat's claws grow in layers, and clawing at a good "something" with intent is their preferred way of removing the older outer layers. It's natural and healthy cat behavior. The "trick" (and it's really not that difficult) is to give the kitty something better to claw than furniture or rugs.

When I adopted Tootsie, my poly Maine coon (who is a bit famous!), my first priority was to make her happy in her new home. So, of course I had a cardboard scratchy (the horizontal kind) and various other goodies laid on. She loved the scratchy, but also took to clawing at the fabric on the box springs, and various other vertical items.

Tootsie was described at the rescue place as being a very "shy" cat, and I wanted to get her to come out of her shell as much as possible. So, NO disciplining except in the most indirect way, was my tactic. When she'd start vertical clawing on the fabric of the box springs or mattress, I'd just disengage her claws and paws, and say something (very softly) like "there we are... that's not what you want to do..." Oh, and plenty of positive reinforcement when she used the cardboard scratchy- oh, good kitty, what a nice kitty, scratch her behind the ears, even a "treat" (small cat food treat item!)

And then I remembered having read somewhere that some cats are "horizontal" clawers, and some are "vertical" clawers. Aha!, I bought two "cat towers" covered in carpet (really not "towers" only about 3 feet tall) and put one downstairs and one upstairs. She was a bit circumspect about using them, at first. But then, well! She got into clawing those cat towers! And I'd cheer her on- good kitty, you go girl! 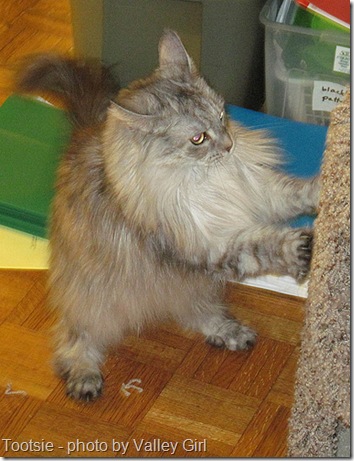 Even though stopping her from clawing the box springs and random furniture wasn't my main motive in getting the cat towers, well, coincidentally, she stopped those activities. Rather, I figured that she might be a "vertical" clawer by preference, and wanted to give her the best! So it was.

And, as a bonus, I have a collection of shed "cat claws" from around the towers. Worth a photo, next time I get the camera out.

And, as an aside, when I adopted Tootsie I got into a conversation with the rescue person who told me that the number one reason (in her experience) that cats are returned to shelters (I assume she meant no-kill shelters like hers) was a failure to use the litter box - and 99% were declawed cats. I can only assume that walking on litter is painful for these kitties (declawing turns good cats to bad). I know this has been mentioned by commentators in some earlier post at POC.

So, I guess its all about the application of commonsense and proper expectations, which seems to be lacking sometimes - just felt like sharing.

Some advice on surgically improving your cat