Yes, my cat likes to have sex with my left arm. You can see it in the video. I think it’s normal. I accept it completely. I want him to express his natural desires. It does no harm when he does it (except to gradually destroy my dressing gown) and I presume it satisfies him to a certain extent. I don’t know whether anybody else has experienced this. Cats bite the nape of the neck of the female to keep her from fighting back. This is what you see in the photos.

The reason he does it in my opinion is because he wants to procreate and he regards me as his mother and I mean cat mother. It is a combination event. He also kneads and purrs. The kneading is a kitten response and replicates a kitten kneading at his mother’s breast to bring on the milk.

The fleece dressing gown is important I believe because it feels like a cat. I have two dressing gowns and the other one does not elicit this reaction.

You can see his sex-drive in the eyes in this photo: 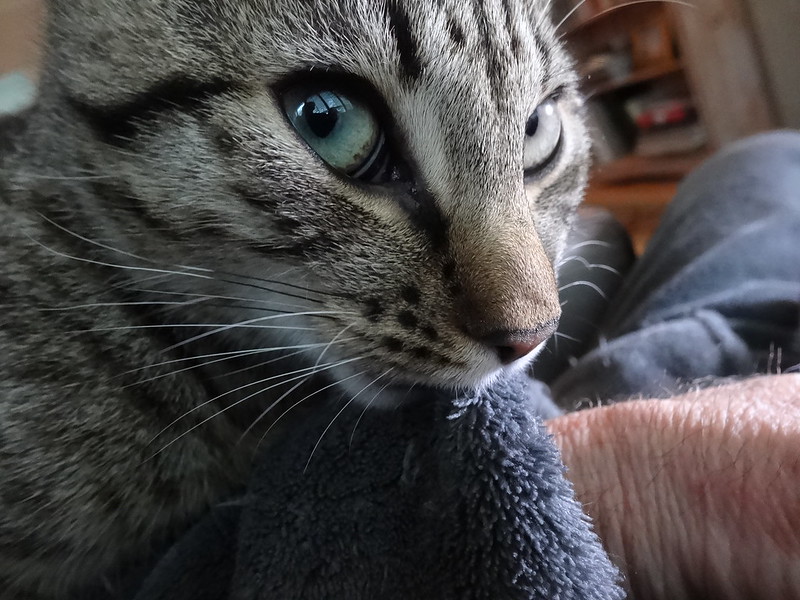 I think it’s important that a cat can express his natural desires and emotions as best as possible. Sometimes we have to compromise for the sake of safety and curtail these drives. Do you think I’m crazy to let him do this? 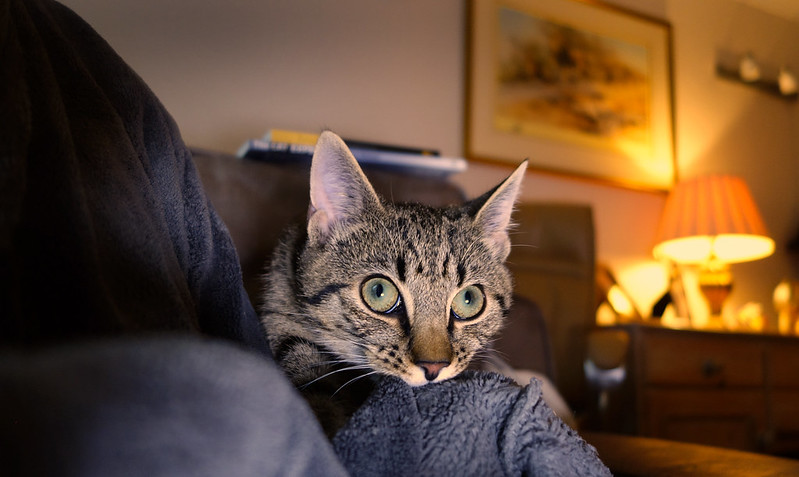 He does it while I am watching television sometimes, I just let him do it. He’ll do for about 10-15 minutes, in all, which is quite a long time. At first I stopped him but then I thought it was unfair. It doesn’t bother me. Somebody might think it’s a bit gross. Some people may think I’m wrong to allow it. I have to be wearing my fleece dressing gown which I presume feels like fur to him! He won’t do it when I am wearing other clothing.

I expect he will stop when he’s neutered (it did not change a thing by the way). He’s never sprayed anywhere. He generally a very well-behaved young cat but being young is a bit manic, driven by his instincts.

At the moment he goes out on a leash. He accepts his harness completely and likes it now. He knows that when it is put on him he is going to go out. I’ve trained him to come to me so when he does go out alone I am hopeful that I can call him back if I’m worried about his whereabouts.

The reason why he goes out on a leash at the moment is because I want him to become familiar with his surroundings. I wanted him to know where the door to his home is. If there is trouble he can then race back and hide. After all, he is very young. And, of course, I would not let him free-roam before being neutered. Also being young he is liable to be stupid and do things which are dangerous to him due to inexperience.

I’m trying to make is life as good as possible while also making it as safe as possible. After moving home to a house he is now confined to a garden enclosure and the house.