If cats tend to prefer husbands over wives, even if the husband didn’t want to adopt the family cat in the first place, one factor might be that women are more likely than men to wear perfume which masks natural body odours, which are so vitally important to domestic cats.

Believe it or not, the title is a sentence used by people to search for information using Google search. It is a search term. Another, similar, one is: my cat prefers my girlfriend. Or it might be: my cat prefers my roommate. The reason in each case is the same: chemistry. And the word ‘chemistry’ means that we don’t know why cats prefer one person to another. In the same way that we cannot be specific about why one person falls in love with another person. It’s about chemistry and the word “chemistry” is designed to hide the complete reason. We don’t know the complete reason as it is a bundle of factors which you often can’t put your finger on. 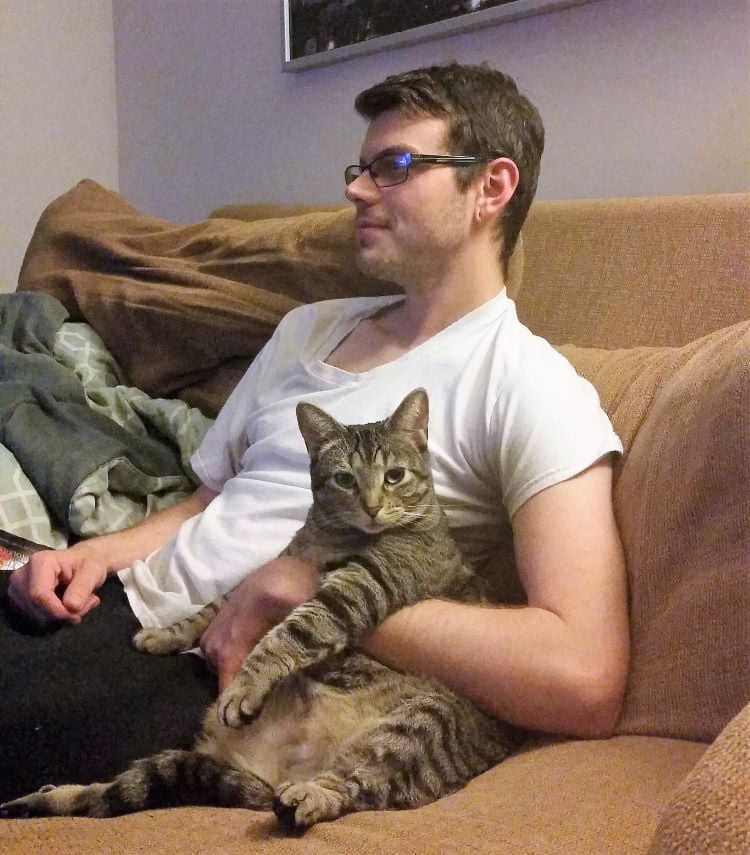 The wife says: “She loves reminding me I’m basically my husband’s side chick.” Photo: Imgur.

And so, it is exactly the same with domestic cats when they favour one human in the family over another. It is interesting that cats can be affected by this chemistry in the same way as humans. This surely points once again to their sentience i.e. living beings with feelings.

You will find many stories on the Internet about cats preferring husbands or wives. We don’t want to be sexist as chemistry transcends the gender of the person. I don’t think we can say that the male human is more attractive to domestic cats than females. In fact, I recently wrote an article about a person in China who set up a cat-sitting business (which pleased me) who said that she almost exclusively hires young women because she believes that cats prefer the voice of women compared to men. I don’t agree with that, by the way, but it’s a thought nonetheless.

The story by an author, Claire Fuller, on the vox.com website highlights the mysteries behind the chemistry between cat and human. It can perhaps cause problems of jealousy if the relationship between the partners is a little fragile. In this instance, that does not apply but Claire Fuller wanted to adopt a cat because she decided to leave her work as an employee and become a freelance writer, actually an author of novels.

Cats are ideal companions for authors who are stuck at home all day because they provide quiet companionship and often they like to be very close by, even getting in the way. Fuller, with her husband, adopted a female cat and they gave her a male name: Alan. She liked the sound of the name and visualised herself calling her with that name. No problem for the cat by the way as cats react to sounds not the gender of the name.

She said that: “I had imagined her being with me in my writing room, sitting on my keyboard or lying on the daybed”. It didn’t quite work out like that because Alan prefers to sleep somewhere else but does visit her writing desk and then leaves to go somewhere else. She said: “Instead, it is my husband she loves, and he has come to love her. She will lie in his arms like a baby; it is only his lap she sits on, and my husband she purrs for.”

She still loves her cat and feels that the arrangement is a success but, once again, we have chemistry playing a role and there’s no denying it or obstructing it. And it seems that in this instance her husband didn’t even love Alan initially or wasn’t particularly concerned but he “came to love her” in response to her love of him.

So, what do we think makes up that bundle of factors which we call chemistry? We have to guess but I would start at the scent of the person she prefers. The scent of a person is very important for a domestic cat as the smell of everything is also important to them. It’s a completely different world to that of humans. We live in the visual world whereas cats decide many things on the basis of scent. They identify objects including their human companion by their body odour.

Something has just come to mind: perhaps Fuller wears perfume which masks her natural body odour. If she does, I would argue that that is a major reason why Alan prefers her husband.

Other influencing factors within that bundle that we call chemistry would be the sound of a person’s voice, their body language, the way they interact with their cat by which I mean the level of gentleness. The way the person handles their cat will obviously be a factor. And perhaps cats can sense if their preferred person genuinely likes cats. Of all these, I would decide on scent as the most significant.

SOME MORE ON THE HUMAN TO CAT RELATIONSHIP:

Why are cats referred to as “it”? Should their status remain as “property”?

The folks who often visit Pictures of Cats.org (PoC) love their kitties and the majority of kitty guardians consider their ...
Read More

Can my pet be buried with me? USA and UK discussed

Can my pet be buried with me? This is a question I had asked myself since long before I lost ...
Read More

NEWS AND COMMENT-SYDNEY, AUSTRALIA: The first point to make is that although huntsman spiders use venom to immobilise prey and ...
Read More

How do cats see us and relate to us?

The reason why I am addressing this question again - and it is a vital question - is because Linda ...
Read More

How to kill a cat – criminal behavior or not?

People search for "How to Kill a Cat" on Google. In my opinion, people who do this are usually committing ...
Read More

Cat quotes – sayings about cats from the great and good

Here is complete list of 'cat quotes' and some comment too. There are many, which is a testament to our ...
Read More

How to Break Up a Cat Fight (or play fight). Cats know how to do things best. Cats: How to ...
Read More

Do our cats judge us?

The BBC has a webpage on the topic as to whether domestic cat judge people. It got me thinking. It's ...
Read More

This is a difficult question to answer without being sexist! Perhaps the answer depends upon who is doing the writing; ...
Read More 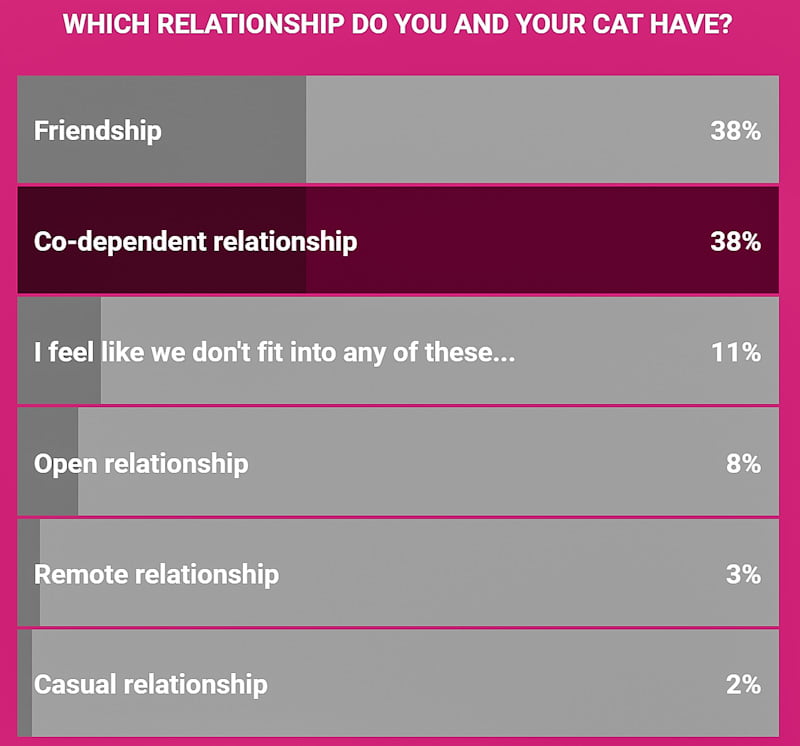 I am in a codependent relationship with my cat

I have decided that I am in a codependent relationship with my cat and I like it. It feels completely ...
Read More