Dreyfuss with Furby and Lola

I confess! I love dogs as much as I love cats. Today I want to tell you about my dog Dreyfuss. He's part Boxer and part something else. He's also the most intelligent dog I've ever owned. He chose me when he was a 6 week old pup sitting in the back of a truck. It's hard to believe he once weighed 12 pounds.

Dreyfuss is spending his retirement years playing with cats. They love him and he loves them. They're drawn to him like a magnet. He sleeps with Furby and before Furby came along he slept with Lola.

He didn't always love cats. Back when I lived in my mama's house there was a time when Dreyfuss lived outside. I had found and tamed a little feral kitten I named Salem (you will get a story on him later). He was about 3-4 weeks old when I found him under the bushes at the front steps.

I named him Salem because he was found on Halloween day. He was too young to eat and hid the first few days. Between the food and the love, it didn't take long to tame him.

When he was about 8 months old he slipped by me and into the outside world. Dreyfuss was about 2 at the time and he went crazy barking when he saw Salem. He couldn't reach the cat but the cat didn't know that. Salem came home 4 days later. I had about given up on ever seeing him again.

I moved out of mama's house to a nearby town. My new home was so big Dreyfuss had his own room. I'd left Salem at mama's and a friend was caring for him until I got settled. Then I went back for Salem, who had become a good outdoor cat and been fortunate enough to stay out of the busy road we lived on.

I'll never forget what happened next. I had Salem sitting in the recliner beside me when Dreyfuss came out of his room. Dreyfuss didn't know this and came over to my chair for his first head rub of the day. Salem poked those front claws straight up in the air and came up hissing, spitting, growling, and other word that falls in the irritated cat category.

After that day Dreyfuss wouldn't go outside to the bathroom and come back in unless I was between him and the cat. It was so funny to watch a 100+ pound dog afraid of a cat.

I moved one more time and again Salem went with me and remained an outdoor cat until his death several years later. It was 5 years before I had another cat.

My daughter Laura got Lola last summer and she's been a great indoor cat. We were very very careful introducing Lola to Dreyfuss. Apparently he'd recovered from his fear of cats. He sniffed her and didn't have any issues except over his food. Lola quickly learned to keep away from him at feeding time.

Dreyfuss was a totally indoor dog and had been for several years. My boyfriend at the time suffered from seizures and Dreyfuss could predict when one was about to hit. Dreyfuss would go over and lay his head on my boyfriends knee and keep him from getting up. On the few occasions the seizure happened outdoors the emergency crews were familiar with my dog. All they had to say was "in the house" and he'd go straight to his room. I also trained my dog in water rescue. He has traveled with me and stayed in several motels and always gets invited back. He is house trained and command trained and super intelligent.

My home now is in the country and I love it. Before I moved in my place was broken into twice. The night the second police report was filed, Dreyfuss found blood under my living room window. The detectives came back out and took the blood as evidence. There had been a lot of burglaries in the area. I never knew if the person was caught. I like to think Dreyfuss played a part in helping with the investigation. Once I got to know the neighbors the break in problem was over because they watched over my place.

A lot of cat lovers probably think I was crazy for having a large dog and a cat co-existing in the same home. I actually have 3 dogs and 2 cats and the family is complete. Lola was the first to fall in love with Dreyfuss. She still likes to walk between his legs whenever she gets the chance. My other dogs Cody (huskey mix) and Darla (Maltese mix) don't interest the cats. Cody is a hermit who stays in my bedroom most of the time. Darla will play with the cats at times but its not an every day thing. 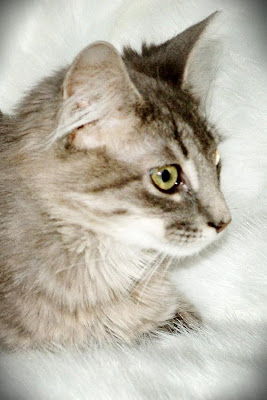 Furby (see above) is REALLY in love with him and has been from the moment they met. Maybe it's because they're the only males in the house. Furby makes him play and curls up next to him sometimes to sleep. They are best buddies. Sometimes Dreyfuss is a warm place to sleep. Sometimes he's a launching pad when the cats go for their food on the bar. They jump on his stomach and just walk all over him some days.

I really don't know what the attraction is. Do they realize he's old and not a threat? Is it a matter of respect? Can they sense he's a 100+ pound baby. Dreyfuss will be 10 in April and spends most of his time either sleeping, licking, eating or cat watching. He's blind in his left eye and beginning to lose vision in the right. He still has a lot of play left in him. Some days are just better for him than others, It's always interesting to see who gets what spot for a nap. Usually Furby and Dreyfuss sleep on the same couch.

My pets keep me entertained to the point I forget to watch TV. They are more interesting than anything I watch. Do any of you have both dogs and cats? Do they get along as well as mine do?

I'm sorry the pictures aren't any better. Most of them were spur of the moment shots.

About Furby and links to more of Joyce's posts