I found my kitten lost and alone and injured the day of my boyfriend's funeral. He just walked across the road in front of me on my way home and I turned around and went back to find him.

I didn't have the heart to ignore him. Every time I travel this particular road I see at least 7 dead animals.

He was sitting in front of an abandoned barn out in the middle nowhere. He was looking up at me and didn't resist when I picked him up and took him home.

First of all let me say I DIDN'T WANT A CAT!I have dogs and my daughter has a cat and I'm layed off from my job at the local hospital. This was not the time for an injured stray kitten. He sure changed my mind in a hurry. 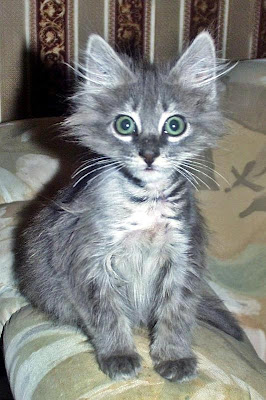 We didn't know it at the time but he had a fly larvae growing in his neck. I called around to different vets and finally one agreed to sell me the antibiotic to heal him. We took him with us to the vet and the assistants fell in love with him and shaved his neck and cleaned the wound.

He literally had a hole in his neck. I've owned 5 cats in the past who were identical to him and know a great deal of cat first aid. At that point we thought it was an abscess. Three days later he wasn't healing and we lanced his neck and later that night the "worm" came out. 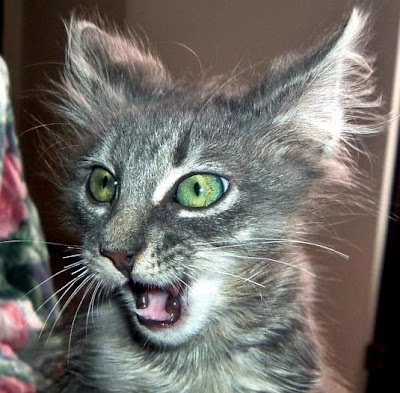 He's been the sweetest most unusual kitty I've ever owned. My daughter and I named him Frankenfurby "Furby" because I've created a little monster.

He's so funny-and clumsy. He'll be taking a nap and roll off the back of the couch then I'll see that little head and two paws come into view and he'll go right back to sleep. I had to put a pillow below the kitchen bar where he eats. He'd take 2 steps backward and fall off. His Turkish Angora name is Emri meaning 'home ruler." He even has my dogs trained. He walks over them and under them to get where he's going. 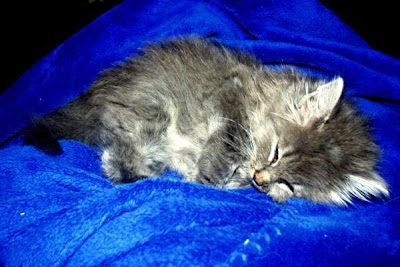 Did I mention we held him 24/7 the first 2 weeks. We wanted him to know he was loved. He also eats out of my plate and I make his food. He sleeps with me and takes naps on my shoulder or in my lap. I have a blanket my boyfriend used his last weeks at Hospice House and he found it the first day and claimed it.

It doesn't matter to me that he isn't a purebred. His head is too small and he's bow-legged when he walks and I'm sure if I stood him upright and painted him white he'd look like a bowling pin.

He loves to lay on his back and doesn't shy away from strangers. He knows he's the guest of honor. I'll wake up at night and find him staring at me.

He had a minor accident when he stuck his head through the hole in a banana cardboard box and couldn't get it back through. I even have a video on YouTube called Kitten in a Pot. Here it is:

I know my boyfriend sent Furby to me to help me during the worst time of my life. Furby doesn't mind if I cry on him at night. I think he's glad just to be fed and held and loved.

Tramp: The Only Rescue I Couldn't Save

Old Ugly and Tabby Were Always Together

I've Learned A Lot This Week By Furby

How I Got My Name By Furby

Huggy Bear Lived With 126 Other Cats

We Lost 4 Cats In One Week By Mothball Poisoning

I've Helped Ferals Since I was a Child

A Personal Choice on Cat Food

The Bygone Era Of The Housecat

How To Photograph Your Pet Without Breaking The Bank

Life is Good by Furby

Furby: Anyone Else Have a Crazy Cat Week?

Hi Everybody I'm in the Movies

Sometimes I'm a Handful by Furby

I Love Mama By Furby

We've Had a Bad Week by Furby

My Newest Moo-vies by Furby

How To Pick A Fight By Furby

Furny Gets a Bath!

We've Been Busy by Furby

Secrets to My Cat Success

Another Busy Week by Furby - see him grown up here.